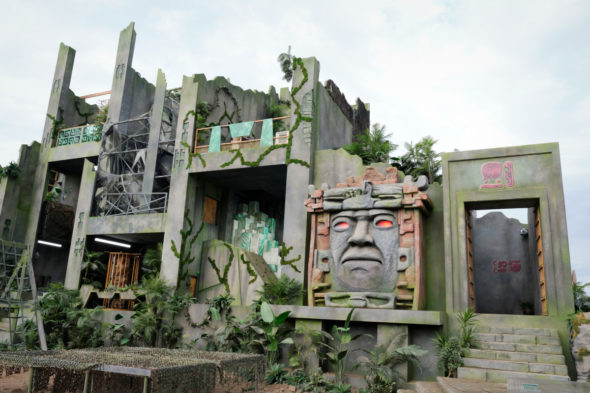 How much tougher are the challenges in this revival? Has the Legends of the Hidden Temple TV show been cancelled or renewed for a second season on The CW? The television vulture is watching all the latest cancellation and renewal news, so this page is the place to track the status of Legends of the Hidden Temple, season two. Bookmark it, or subscribe for the latest updates. Remember, the television vulture is watching your shows. Are you?

Airing on The CW television network, the Legends of the Hidden Temple TV show is an adult version of the game show that ran on Nickelodeon 1993-95. The challenges are tougher and there’s a much bigger prize on the line — $25,000. It’s hosted by Cristela Alonzo with Dee Bradley Baker returning as the voice of Olmec, the giant talking stone head located at the gate of the game’s temple. In the competition, four teams of two go on a quest, but only one team will be “strong enough and smart enough” to enter the ominous Olmec’s Temple, avoid the dreaded Temple Guards, retrieve a lost treasure, and return it to its rightful heir.

The first season of Legends of the Hidden Temple averages a 0.06 rating in the 18-49 demographic and 222,000 viewers in the live+same day ratings (including DVR playback through 3:00 AM). While these numbers don’t include further delayed or streaming viewing, they are a very good indicator of how a show is performing, especially when compared to others on the same channel. There can be other economic factors involved in a show’s fate, but typically the higher-rated series are renewed and the lower-rated ones are cancelled. Find out how Legends of the Hidden Temple stacks up against other CW TV shows.

Will The CW cancel or renew Legends of the Hidden Temple for season two? The network now has two more hours to fill each week so it’s no surprise that the programmers are adding some lower-cost game shows to the schedule. Many millennial viewers have fond memories of this show’s original run nearly 20 years ago, but the show’s not done great in the ratings. I think there’s a chance that it will be renewed and perhaps be moved to Saturday nights. I’ll update this page with breaking developments. Subscribe for free alerts on Legends of the Hidden Temple cancellation or renewal news.

6/4/22 update: Legends of the Hidden Temple has been canceled.

What do you think? Were you hoping that the Legends of the Hidden Temple TV show would be renewed for a second season? How do you feel that The CW cancelled this TV series, instead?

Princess Mononoke’s Exploration of Man vs. Nature Endures the Test of Time

Elon Musk may be luring Apple into a fight with Republicans