For ages, the term “millennial” has been thrown around to describe anyone born between 1981 and 1996, and millennial movies – from kid flicks to teen comedies – are ones that helped shape that particular generation as they were growing up. Though older generations may complain about the supposed privilege or general snowflakery of a millennial, the truth is that many films tailored especially for this age group helped the world become a more empathetic, inclusive place. Well, on-screen, anyway.

RELATED: Is ‘Search Party’ the Harshest Critique of Millennial Culture Yet?

No longer were theaters filled with the angry, alt vibes of Generation X. Instead, these millennial movies carry a similar theme: everyone is worthy of dignity and respect, and the quality of our character should take center stage over superficial differences. And so, get ready to cheer on the underdog because, in millennial movies, the good guys finish first — even when they lose.

Perhaps the most iconic of all millennial films, Tina Fey’s Mean Girls takes a familiar teen film trope and inverts it, making even the bullies seem worthy of occasional empathy. Lindsay Lohan plays the new kid in school who ditches those who befriend her first for the popular girl clique, led by Rachel McAdams.

RELATED: The Most Iconic Prom Looks in Cinema From ‘Carrie’ to ‘Mean Girls’

Though in many ways reminiscent of 1995’s Clueless, Mean Girls places far more focus on getting to know and understand the motivations of its bullies. What results is a more balanced narrative in terms of audience relatability. Sure, McAdams plays a spoiled, judgemental brat, but what is suggested by the ending is that her manufactured social class was getting in the way of what each of the girls could accomplish if they embraced their true natures. Stream it today on Paramount+.

COLLIDER VIDEO OF THE DAY

‘Napoleon Dynamite’ (2004) Is All About Being Yourself 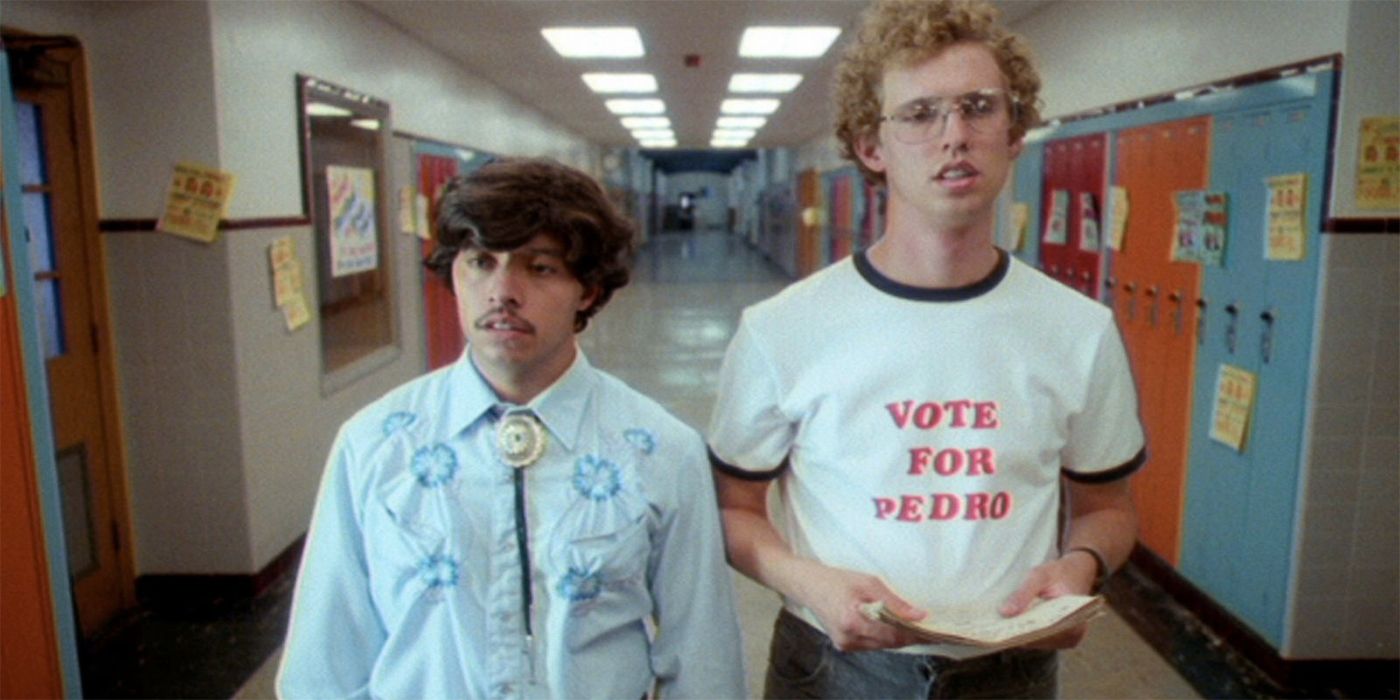 Arguably the oddest film on the list, Napoleon Dynamite helped shape and define the millennial generation by embracing a consummate underdog, Pedro. In the movie, Napoleon (Jon Heder) is a social outcast in a small Idaho town who befriends Pedro (Efren Ramirez), a transfer student from Mexico. He proceeds to run his campaign for class president.

Streaming on fubuTV and Hulu Plus, this unexpected cultural phenomenon’s wholesome message of inclusivity no doubt influenced viewers to befriend the so-called outcast — even celebrate them — because while the bullies in the film laugh at the duo, audiences laugh with them, reverberating the positive message of the value of authenticity.

Starring Elliot Page and Michael Cera as 16-year-old friends in a pregnancy predicament, Juno is a touchingly funny story rife with socio-political commentary on the challenges of understanding motherhood, adulthood, and adolescence — all at the same time.

The film’s biggest strength lies in screenwriter Diablo Cody. She doesn’t shy away from showcasing what is often seen as a controversial situation nor focussing on how impressionable and vulnerable Juno is. Notwithstanding, in the end, Juno’s choices are always hers to make, sending strong messages about body autonomy and motherhood. As a bonus, Page’s on-screen mother, played by Allison Janney, is the best movie mom ever. Available to stream on Hulu, Prime, and Apple TV.

In this twist on the classic fairy tale, Shrek (Mike Myers) is a disgusting, reclusive, and mannerless ogre who falls in love with an uptight princess named Fiona (Cameron Diaz). Thinking she would never love him for who he is, he rejects her, only for her to later decide to ditch her beautiful human visage, trading it in to be with the ogre of her dreams.

RELATED: How Shrek the Third Signaled the End Was Near for This Fairy Tale Saga

The message in this film may not be original. Still, for millennial kids, the movie’s humor and feel-good vibe (not to mention its uplifting soundtrack) reminded audiences that everyone is an all-star because, as the adage goes, it’s what’s inside that counts. Shrek is available to stream on Hulu.

‘Slumdog Millionaire’ (2008) Is a Fairytale for the Millennial Generation

Due to its phenomenal success, it’s surprising to learn that Danny Boyle’s Slumdog Millionaire nearly went straight to DVD. A story of true love features Dev Patel as a young man from the slums of Mumbai who, after appearing on a game show, is accused by police of cheating and forced to explain how he knew each answer.

The message is that everyone — even those considered poor or unprivileged — deserves a shot at their “happily ever after” because class differences do not define a person’s worth. Available to stream on Hulu, Starz, and Crave.

‘Toy Story’ (1995) Teaches Kids (and Adults) the Importance of Acceptance

Streaming on Disney+, Pixar‘s first major release, Toy Story, broke animated storytelling’s mold. It also influenced millennials (and Gen-Xers) through a seemingly endless list of charming life lessons, such as the importance of adapting to change, looking out for one’s friends, and appreciating everyone for having their unique abilities.

RELATED: Most Emotional Pixar Movies That Are Worth The Tears

However, the main lesson is that jealousy and bitterness impede the betterment of ourselves and our environment. Working together and adopting a positive outlook dictate a person’s happiness, while resentment represents time one can’t get back. All of these themes make Toy Story the ultimate Millennial kid movie.

The Sandlot sees Scotty Smalls (Tom Guiry), a new kid in town, as he tries to fit in with the other boys in his neighborhood. Though he doesn’t know how to play baseball, the boys welcome him into their group, but their summer turns when Scotty borrows his stepdad’s signed Babe Ruth ball to play with, only to lose it to a tall fence and an enormous dog.

The thing that makes The Sandlot such a quintessential millennial kid movie is that it’s not about being the best and winning the trophy; it’s simply about having fun and making friends. Notably, this shift in perspective remains a near anomaly in sports movies. Available to stream on Disney+ and Hulu Plus.

‘Harry Potter’ (2001) Is All About Finding Your People

Though one could argue that it was J.K. Rowling‘s successful book series that inspired a generation, the Harry Potter films certainly helped, inserting the magic of Hogwarts into the psyches of millions of millennials.

What resulted has been nothing short of magical, with kids and teens (adults, too) role-playing, imagining themselves in the house of Gryffindor’s bravery while rejecting Slytherin’s ideology of ambition. The reason for the divide is simple: most people want to be the good guys — especially when they’re young — and it wouldn’t be beyond possibility to imagine this desire living on in millennials across the globe. See every Harry Potter film on Peacock Premium, Peacock Plus, or HBO Max.

James Cromwell stars as a farmer who discovers that his piglet, Babe, has an unusual talent for sheep herding, but not all the other animals are so psyched about it. When the farmer signs Babe up for a herding competition, doing so creates gossip about town and friction at home.

Streaming on Hulu, the film promotes inclusivity like no other, as Babe is slowly but surely accepted by all the farm animals, the farmer’s family, and, eventually, the entire county fair. Babe is a reminder that just one person (or pig!) is enough to change the world.

Is it a Halloween movie or a Christmas movie? Fans of the film may never agree, but what can’t be argued is that Tim Burton‘s stop-motion musical has got heart. In it, Jack Skellington (Chris Sarandon) is a resident of Halloween Town who’s on top of his scare game, but when he accidentally stumbles into Christmas Town, he taps into a passion he’d never felt before.

Some 20 years later, The Nightmare Before Christmas inspires audiences, reminding them of the importance of being yourself and following your heart. With films such as these, it’s no surprise that millennials are an open-minded generation who accepts and celebrates the unfamiliar.

A classic rivalry story, Bring It On features Gabrielle Union and Kirsten Dunst as the cheerleading captains of their respective high schools. When a series of revelations regarding cheer espionage lead to an understanding between competitors, the girls gain respect for one another and fight fair.

There are no leading villains or heroes in this movie, so it doesn’t matter whose side you’re on. But, the film makes clear that the most deserving of the teams takes home the trophy, and it is long overdue.

Jennifer Garner and Mark Ruffalo‘s classic rom-com is another feel-good flick with a positive message. For those who missed it, it’s a bit like Tom Hank’s Big, only in this film, everyone else has aged a couple of decades. Jenna (Garner) just happens to have done so overnight to find out that in real-time, she dumped her best friend, Matty (Ruffalo).

It’s sugary-sweet, sure, but Garner’s delightful performance makes the film worth it. In true millennial fashion, the moral of the story is to be a good person by not forgetting what (or who) matters in the bigger scheme of life.

Having a BA in cinema studies and an MA in screenwriting, Erin is all about storytelling. Previously, she wrote for the animated series, “YooHoo and Friends” and published an instructional book called “The Uncomplicated Essay.” She now coaches other writers through her website, https://uncomplicatedessay.com and at Vancouver’s University Canada West.

Sign up for Collider’s newsletter for exclusive news, features, streaming recommendations and more

‘M3GAN’ Is Now Available on Watch at Home

The Stories We Tell Ourselves Make—or Break—Our Negotiations

The 15 Best Leather Dresses From Mini To Midi & More

Iggy Azalea has a laugh in red bikini for photo shoot

North Dakota Republican Declares LITTERBOX EMERGENCY. Don’t Laugh At Her, She Is A Child Of God!