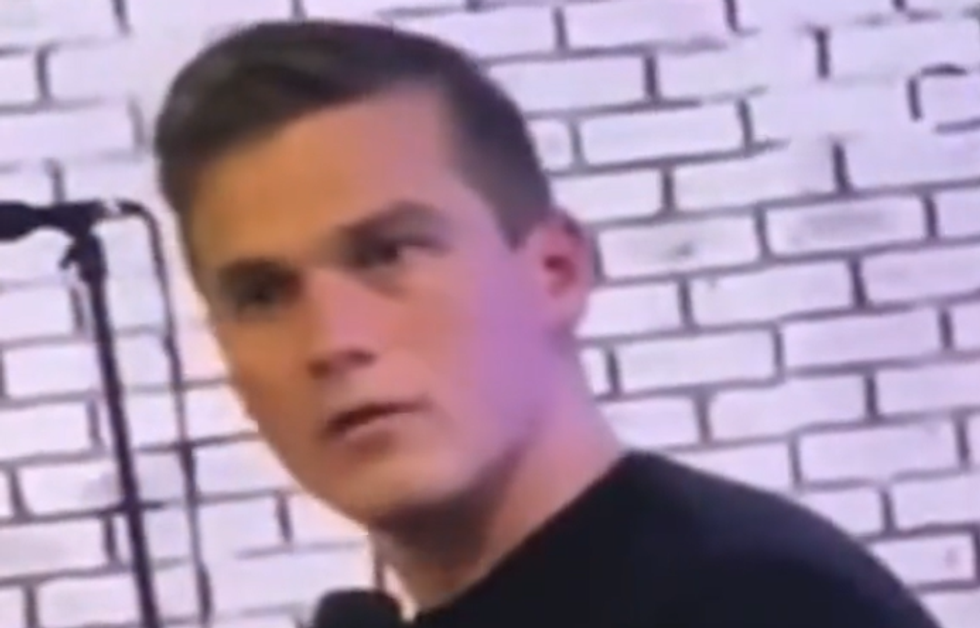 Before entering politics, Madison Cawthorn managed a Chick-fil-A and worked as a staff assistant the district office of his predecessor Mark Meadows. While Your Wonkette would never denigrate honest work, there’s nothing in this guy’s resume that would indicate that he was prepared to be an actual factual congressman in the US House of Representatives. Indeed Meadows, who presumably had some idea of Cawthorn’s abilities, went balls to the wall in a failed effort to make sure he didn’t have to hand his seat off to the then-24-year-old.

And just this once, we will have to agree with Mark Meadows. The past two years have shown exactly why Trump’s chief of staff wanted a replacement-level, middle-aged white lady who would toe the party line instead of a shitposting toddler who alternates between run-ins with the police and attacking his fellow Republicans. Which is why the members of his own caucus are unsubtly trying to shiv Cawthorn before next week’s primary, in hopes that his constituents will abort this non-viable congressman and spare them the pain of having to carry him another term.

On Wednesday, the Post ran a story on how much the rest of the North Carolina delegation, particularly Senator Thom Tillis, despises this little twit.

Tillis and many of North Carolina’s top Republicans, including the state’s House speaker and Senate leader, are backing a challenger, state Sen. Chuck Edwards, in next Tuesday’s primary. Tillis has personally raised money for the effort. An allied super PAC is bombarding the district with TV ads and mail pieces highlighting Cawthorn’s string of scandals and indiscretions — a list that gets longer with almost each passing day.

It appears never to have occurred to this brain genius that there might be a political consequence for talking smack about his fellow Republicans.

“Why is your wife attacking me on Twitter?” Cawthorn texted Tillis back in November.

“I don’t feel like I’ve attacked you that much,” Cawthorn responded. “I think I’ve said I don’t think your conservative enough, did not realize that made us enemies.”

In fact, Cawthorn made a lot of enemies in North Carolina, which is why Susan Tillis was tweeting about him. Because without talking to any of his fellow Tar Heel Gippers, the Boy Wonder announced last year that he was switching to run in a safer Republican seat. Not to improve his own electoral prospects, he assured voters, but because “I am afraid that another establishment go-along-to-get-along Republican would prevail there. I will not let that happen.”

That “establishment go-along-to-get-along Republican” Cawthorn cockblocked was House Speaker Tim Moore, i.e. not someone whom a normal person would seek to alienate if he wanted a future in North Carolina Republican politics. In the end, Cawthorn didn’t even wind up switching districts!

For the past month, the knives have been out for Cawthorn, with regular drops of videos of him acting like a second-string high school quarterback on spring break. Here he is in women’s underwear! Here he is getting his crotch groped by a male aide, who is also his cousin. Here he is sending Venmo messages paying the aide for “getting naked for me in Sweden.” Here he is cavorting naked in bed with said aide. Here’s Donald Trump wondering if Madison Cawthorn is “fucking his cousin?”

Today CNN has a story about how much everyone in North Carolina and DC hates Madison Cawthorn. Spoiler Alert: It is a lot.

Let’s go out on a limb and assume that Kevin McCarthy, that spineless bowl of jell-o, ain’t gonna do shit to punish Cawthorn. But Republicans’ willingness to say out loud that this guy is a bloody idiot shows that they realize just how much of a problem he is for the caucus.

He’s getting no support in the primary from his fellow North Carolina House members:

Asked whether he supported Cawthorn for his reelection, Rep. David Rouzer said, “I’m not getting involved in the primary one way or another.”

Rep. Dan Bishop said, “I don’t have a comment on that.”

Rep. Virginia Foxx laughed, paused, and said, “Right now, I’m just going to vote.” Her campaign did not respond to requests for comment.

And both Tillis and Senator Richard Burr, who is retiring, have explicitly come out against him.

“There’s no one thing that put me in a position to where the first time in my career I’m opposing a sitting Republican,” said Tillis, who has recommended that the Ethics Committee investigate Cawthorn for possibly involvement in a crypto pump and dump scheme. “I’ve never done it. But it’s the totality. It’s a lack of seriousness.”

Burr was less circumspect: “He’s an embarrassment on any day that ends in ‘y.'”

Remote Workers Don’t Want to Go Back to the Office

Musk Could Try To ‘Get Out’ Of Twitter Acquisition After ‘Troubling’ Decision To Put Deal On Hold: Analysts

Livvy Dunne shows gorgeous leotard for a moment of appreciation

Livvy Dunne has a fabulous leotard and she is showing her fans. Pic credit: @livvydunne/Instagram Livvy Dunne...