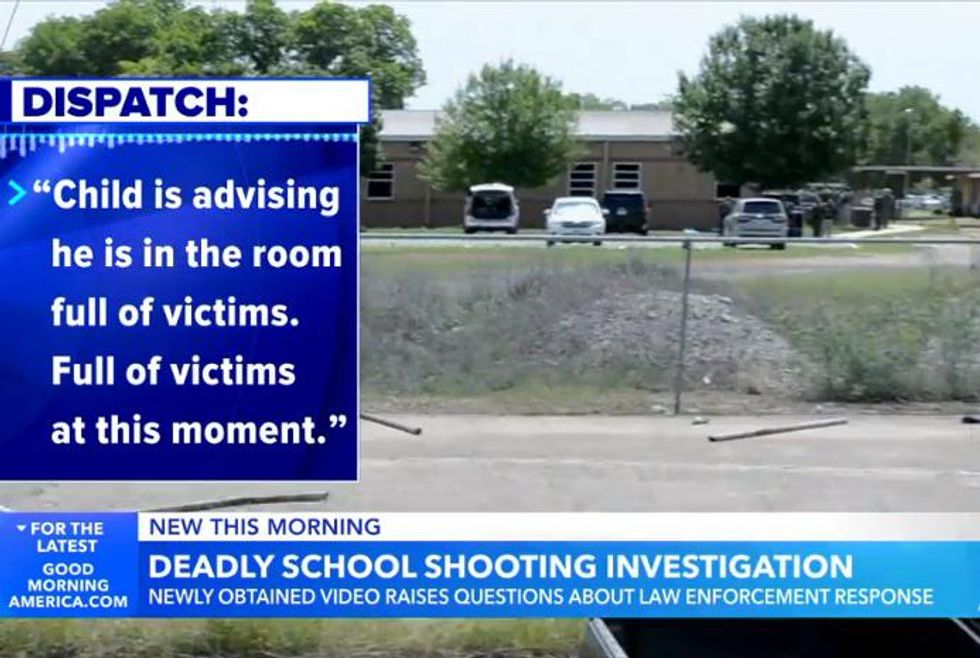 During his press conference Friday, Texas Department of Public Safety Director Steven McCraw “explained” (at least for now) why police just stood around during last Tuesday’s mass shootings in Uvalde, Texas. According to McCraw, the delayed response was the result of a terrible mistake in judgment: The incident commander near the school incorrectly believed that, with the shooter locked inside two adjoining classrooms, the scene was no longer an “active shooter” event, but was instead a “barricaded subject” incident, so despite there being 19 police officers inside the school, they were directed to evacuate teachers and kids, leaving the shooter to be confronted later — much, much later — by a special Border Patrol tactical team that entered the classroom and shot the killer.

Seventy-seven minutes went by between the time the shooter entered Robb Elementary and the the time he was killed by the Border Patrol agents. During that time, McCray said, 911 dispatchers received multiple calls from inside the classrooms, from kids who told the dispatchers that there were several children still alive; the callers repeatedly asked the dispatchers to send police right now, please.

At Friday’s presser, McCraw said it wasn’t clear whether cops at the scene received word of the 911 calls. When asked if the incident commander knew kids inside the classroom were asking for police to help, McCraw said only that “That question will be answered,” and that “I’m not going to share the information we have right now. Because I don’t have — I don’t have the detailed interview right now.”

At least part of that narrative seems no longer operative today. ABC News reports that it has new video from outside the school, in which a 911 dispatcher can be heard relaying information about a call received from a child inside the classroom. Here’s the story that aired on “Good Morning America” today; we’ve cued it up to the relevant part.

In addition to showing scenes of police rescuing kids from a window in the school, the video captures a dispatcher saying, “Advise we do have a child on the line.” The dispatcher says the child is calling from Room 12, and asks, “Are we able to — is anybody inside of the building at this…?”

The dispatcher’s calls match up directly with McCraw’s descriptions of the 911 logs from the shooting, with minor differences like the room number and the gender of the child. Here’s that timeline, as McCraw described it Friday; we’ve bolded the parts that match to the recording ABC obtained:

Again at 12:16, she’s called back and said there was eight to nine students alive.

At 12:46, she said she not could not—— that she could hear the police next door.

At 12:51, it’s very loud, and sounds like officers are moving children out of the room. At that time, the first child that called was outside before the call cuts off.

Again, the Border Patrol didn’t enter the room until about 12:50, although as we also know, the tactical team had arrived on the scene between noon and 12:15 — and were initially ordered to wait. They ultimately ignored that order and, with a custodian’s key, went after the shooter of their own volition.

So yeah, they were on hand right around the time the child said there were kids still alive in the classroom.

We’ll add that ABC News does point out that, from the video alone, “It is not clear who on scene, if anyone, heard the calls coming in from the dispatchers.” But the dispatchers certainly weren’t on the radio chatting it up with the Morning Drivetime Zoo Crew. ABC News also doesn’t say anything about the source of the video or how it came to them, so we don’t know if it’s from a law enforcement leaker or a civilian with a police scanner, or what.

The US Department of Justice announced Sunday it will conduct a “Critical Incident Review” of the shooting and the police response, saying the review’s goal is to

provide an independent account of law enforcement actions and responses that day, and to identify lessons learned and best practices to help first responders prepare for and respond to active shooter events. […]

As with prior Justice Department after-action reviews of mass shootings and other critical incidents, this assessment will be fair, transparent, and independent. The Justice Department will publish a report with its findings at the conclusion of its review.

At the rate information continues to come out about what happened, we won’t be at all surprised if the next few days reveal any number of new horrors about the botched police response.

And again, where the FUCK was the Uvalde Police Department’s SWAT Team?

Yr Wonkette is funded entirely by reader donations. If you can, please give $5 or $10 a month so we can all stare in disbelief together at this bullshit.

Low back pain: How over-the-counter medicine might be making it worse

Meta Announces the Next Step in its Metaverse Transition

The Creator Economy is Booming. Here are 6 Trends for Live-Streaming in 2023

Ideas Any Date, From Day To Night

The 8 Best Marks & Spencer Basics to Buy and Love Forever

On our shortlist this season are pieces such as Breton stripes, leather separates, cashmere knits and ballet pumps, all of...

Chinese spy balloon has been spotted over the U.S.