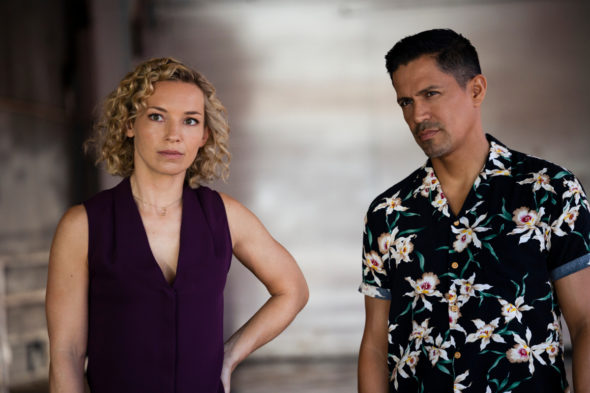 Thomas Magnum and his friends may get another chance at having a fifth season. Last month, CBS cancelled the Friday night series but there are discussions underway to possibly save it.  Magnum PI was likely the most-watched broadcast series to be cancelled during the 2021-22 season.

An action-drama series, Magnum PI stars Jay Hernandez, Perdita Weeks, Zachary Knighton, Stephen Hill, Tim Kang, and Amy Hill. Recurring performers include Lance Kim, Chantal Thuy, and Martin Martinez. This reboot of the 1980s TV show follows Thomas Magnum (Hernandez), a decorated former Navy SEAL who repurposes his military skills to become a private investigator. He lives in a guest cottage on Robin’s Nest, the luxurious estate where he works as a security consultant to supplement his P.I. business. The “majordomo” of the property is Juliet Higgins (Weeks), a beautiful and commanding disavowed MI:6 agent who keeps Magnum in line. When Magnum needs back-up on a job, he turns to his trusted buddies and fellow POW survivors, chopper pilot Theodore “TC” Calvin (Hill) and Orville “Rick” Wright (Knighton), a former Marine door-gunner who now runs a nightclub. Magnum frequently has run-ins with police detective Gordon Katsumoto (Kang) and the two are more alike than either cares to admit. The unofficial “House Mom” and cultural curator of Robin’s Nest, Teuila “Kumu” Tuileta (Hill) is also one of Magnum’s biggest fans.

The fourth season of Magnum PI averaged a 0.42 rating in the 18-49 demographic and 5.24 million viewers. Compared to season three, that’s down by 20% in the demo and down by 6% in viewership in the live+same day ratings (including DVR playback through 3:00 AM). In the live+7 day ratings, the reboot averaged a 0.70 demo and 7.38 million with delayed viewing added in.

It was reported that the cancellation came after CBS and the show’s co-producing studio, Universal Television, couldn’t come to an agreement for a fifth year. As traditional viewing has been dropping, networks are less willing to spend as much on shows that they don’t own. It also didn’t help Magnum’s chances of survival when the network’s pilots for new drama ended dup being strong contenders for space on the schedule.

Deadline now reports that there are talks underway for NBC and/or USA Network to save the series. One scenario being considered would see fifth season episodes running on NBC while USA would air reruns. There has also been talk of potentially moving the series to the Paramount+ streaming service.

A deal for season five of Magnum PI would need to be worked out by the end of the month, before the cast’s contracts expire. NBCUniversal would need to extend the cast options if negotiations continued past that date.

SHERLOCK MENDELSON AND THE MISSING AFIKOMEN

by Trevor Kimball, February 1, 2023(Photo by: CBS Media Ventures) Phil McGraw and his wife Robin will...

‘The Last of Us’ Episode 5 Will Debut Early