The Outrageous Truth About Green Gummy Bears Will Destroy Your World. Tabs, Wed., May 25, 2022

It’s the most American of horrors, again. 19 children and two adults were killed in a shooting at Robb Elementary School in Uvalde, Texas, Tuesday. The children were in the second, third, and fourth grades. By the end of the evening, some parents still didn’t know whether their kids were alive or not.

The shooter was an 18-year-old high school dropout who killed his grandmother before heading to the school. He had purchased the two assault-style semiautomatic rifles used in the shootings earlier this month, on his 18th birthday. The shooter was shot and killed by one of several Border Patrol agents who responded to assist local law enforcement; the Border Patrol agent was wounded by the shooter but able to walk out of the school.

The National Rifle Association is scheduled to hold its annual convention in Houston this week, and isn’t it something how that happened right after Columbine too? [AP]

President Biden addressed the nation Tuesday night, calling for sensible gun laws and asking “When in God’s name are we going to stand up to the gun lobby? When in God’s name will we do what we all know in our gut needs to be done?” [White House]

Honestly, I don’t expect it to change in my lifetime, but I’d love to be proven wrong. Here’s the video of Biden’s brief remarks:

Sen. Ted Cruz (R-NRA) tweeted that he and his wife Heidi “are fervently lifting up in prayer the children and families in the horrific shooting in Uvalde,” a sentiment very similar to that he’s tweeted following other massacres.

Just to be clear fuck you @tedcruz you fucking baby killer.

Cruz is slated to speak Friday at the NRA convention in Houston; we assume he’ll show up and make everyone despise him harder somehow.

David Frum had some good thoughts on thoughts and prayers:

Thoughts and prayers. It began as a cliché. It became a joke. It has putrefied into a national shame.

If tonight, Americans do turn heavenward in pain and grief for the lost children of Uvalde, Texas, they may hear the answer delivered in the Bible through the words of Isaiah:

“And when ye spread forth your hands, I will hide mine eyes from you: yea, when ye make many prayers, I will not hear: your hands are full of blood.”

It’s right up there with “Just to be clear, fuck you @tedcruz you fucking baby killer.” [Atlantic]

In non-shooting news, several states held primary elections Tuesday and we’ll be updating you on the results this morning. It was a rough day for Donald Trump, who endorsed a bunch of losers.

Georgia: Gov. Brian Kemp won the Republican nomination, handily beating former Sen. David Perdue, who has now lost two elections after fluffing Trump. Secretary of State Brad Raffensperger, who sucks deeply, beat Trump endorsee Rep Jody Hice, who in addition to sucking was an election denier. In the GOP primary for US Senate, former football person Herschel Walker did manage a win, largely because no one else had much name recognition. He was endorsed by Trump, so great job, big win, and good lord this guy does not belong in the Senate. Asked whether he thought new gun laws should be passed after the school shooting in Texas, he replied only “What I like to do is see it and everything and stuff.” No, he did not elaborate. [AP / Manu Raju on Twitter]

Alabama: In the GOP race for US Senate, former Rep Mo Brooks came in 16 points behind Katie Britt; Britt fell just short of a majority so they’ll go to a runoff. It won’t count as a loss for Trump — or a win — because he unendorsed Brooks in March. [WTVM]

Texas Runoffs: In the GOP primary for attorney general, Ken Paxton survived a challenge by George P Bush. And the closely watched Democratic primary for US House between incumbent Henry Cuellar, the last officially anti-abortion Democrat, and challenger Jessica Cisneros, was too close to call when we called it quits. [Texas Tribune]

For some reason I took a picture of Thornton’s shadow on the wall when he was sitting in the front window. The snack signal! 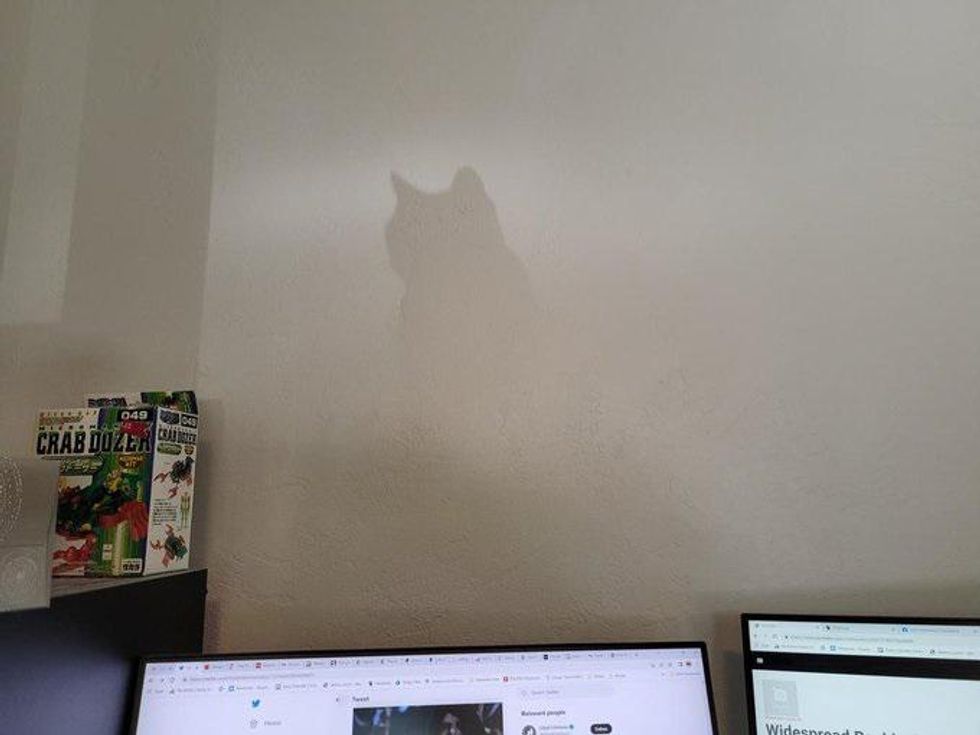 Margaret Atwood and her publisher, Penguin Random House, will be auctioning off a one-of-a-kind book: A specially made copy of The Handmaid’s Tale that is quite literally fireproof. The auction, through Sotheby’s, will raise money for PEN America, the nonprofit that supports freedom of expression in literature. The project arose out of the last year’s wave of book bannings (and calls for book burnings, even) by rightwing Republicans around the country. The AP explains,

The fireproof narrative is a joint project among PEN, Atwood, Penguin Random House and two companies based in Toronto, where Atwood is a longtime resident: the Rethink creative agency and The Gas Company Inc., a graphic arts and bookbinding specialty studio.

Rethink’s Robbie Percy said that he and fellow creative director Caroline Friesen came up with the idea. Late last year, they had heard about a Texas legislator who listed hundreds of works for potential banning from school libraries: Percy and Friesen wondered if it were possible to make a book protected from the most harrowing censorship. […]

“We thought an unburnable copy of ‘Handmaid’s Tale’ could serve as a symbol,” he said.

It took two months to create the book out of “Cinefoil,” a flame resistant aluminum product that was so thin that printing the pages was a challenge, since pages would slip out of place and get et by the printer. The pages had to be hand sewn with nickel copper wire.

To promote the auction, Atwood went all Fahrenheit 451 in a video, turning a flamethrower on her unburnable novel. She looks pretty into it, frankly.

It was a pleasure not to burn. [AP / Unburnablebook.com]

Yr Wonkette is funded entirely by reader donations. If you can, please give $5 or $10 a month to help us keep this mommyblog out of the ashes and under your eye.

5 Ways to Harness the Value of your Ecosystem