Polls in Georgia are open today for the state’s primary election, and David Perdue, the former senator who’s challenging incumbent Gov. Brian Kemp in the Republican primary, has mostly been campaigning on Donald Trump’s Big Lie, suggesting Kemp helped evil Democrats steal the 2020 election. Polling suggests that’s not going so great, even though Donald Trump endorsed Perdue. Also he’s closing his campaign out by being an out-and-out racist to Stacey Abrams.

But as NBC News reports, Perdue is padding his righting crazy cred with some extra culture war bullshit, fighting against construction of a huge electric vehicle factory slated to be built on farmland in Morgan and Walton Counties about an hour’s drive from Atlanta (a round trip is well within the Rivian R1T pickup’s 314 mile range). Yep, the site is so big it’s in two counties.

The factory is expected to create about 7,500 full-time jobs, plus jobs in construction and support, but Perdue claims the Rivian truck plant might also fill Georgia with scary woke cooties, because Rivian is based in California, which is where Nancy Pelosi and Adam Schiff are from! Even worse, to attract the $5 billion plant, being touted as the biggest industrial project in Georgia history, Kemp and the state lege offered $1.5 billion in tax incentives.

Predictably, Perdue couldn’t be satisfied with asking whether that’s a good use of state money. You see, wingnut boogeyman George Soros owns a small share in Rivian, so Perdue has been insisting Kemp handed your taxpayer money personally to Soros, “minority shareholder” be damned. And everyone in the Republican base knows what that means. (Jews. It means “Jewish Puppetmaster” to their target audience.)

See how scary these puppetmaster pickups are? 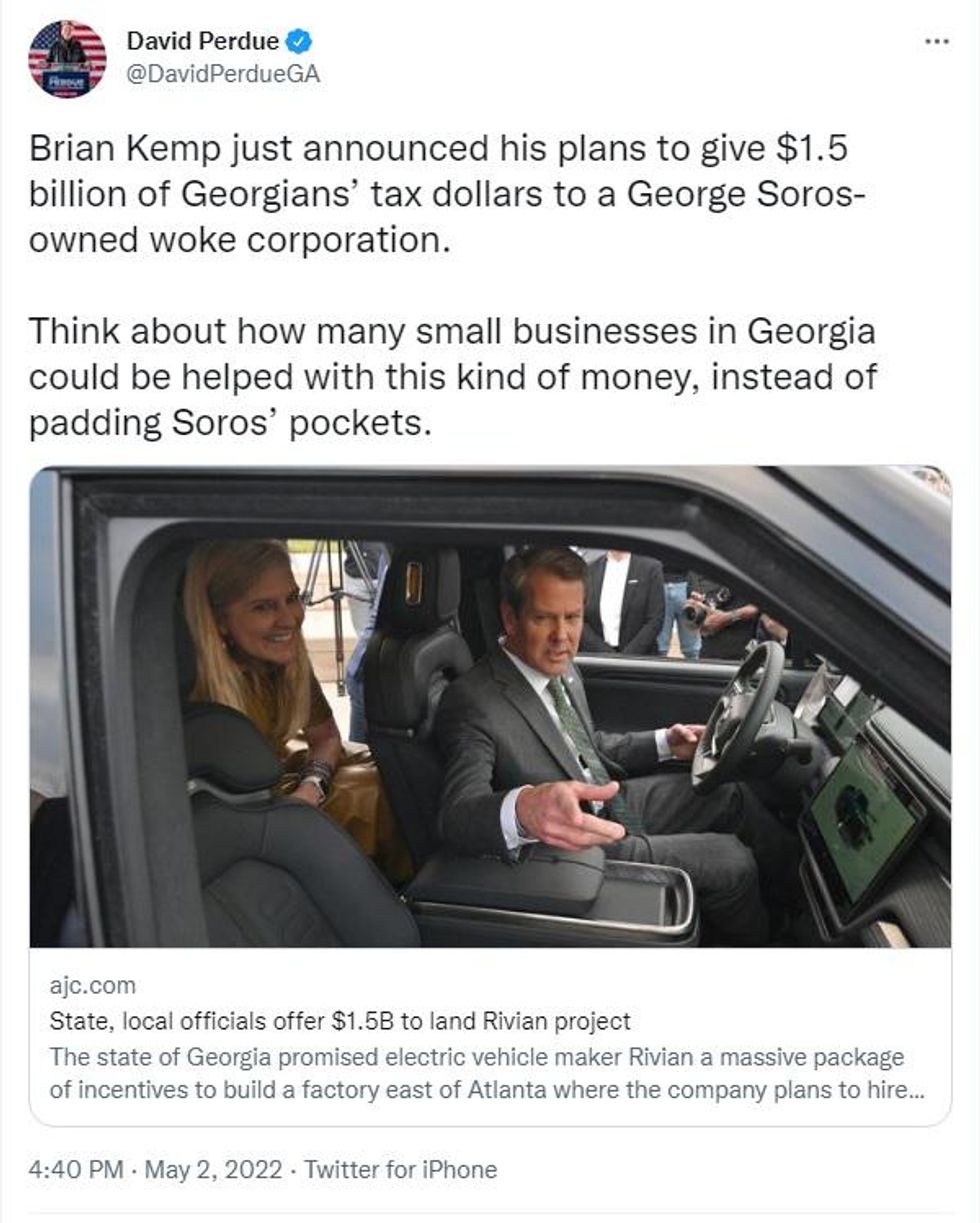 So you see, kids, these Rivian pickups and SUVs are truly the $80,000 light trucks of the woke socialist radical Great Replacement apocalypse. And it’s true, there really is a plan to replace your internal combustion cars and trucks with clean vehicles with terrific torque and lower maintenance costs. Oh, the horror!

Perdue complains that going ahead with the Rivian factory will bring Globalist Taint to Georgia, because OMG California and EVs!

“It’s a woke California company whose mission is to turn the world green,” Perdue said this month while stumping with local activists trying to stop the plant. “They aren’t interested in this part of the country. They just want to make money off of us.”

(Just an aside here, but Wonkette’s Evan who is editing this and who lives in Memphis notes that they are building that multi-billion dollar megasite an hour east of Memphis where Ford will make its woke electric F150s, and you know what Republican electeds here are doing? Tripping over their dicks to take credit or at least make sure you know they are part of it. All of this is to say sheesh, David Perdue is an idiot.)

Another Trump-endorsed Georgia candidate, Vernon Jones, who’s already tried to benefit from Trump-style racism and immigration panic in his campaign for Congress, went even further in his attack on Rivian. In a Facebook post back in December, when the deal was announced, Jones accused Kemp of selling out Georgia voters and trying to turn the state into a woke hellhole!

Governor Brian Kemp’s campaign’s email claims that he wants to stop “Hollywood, liberal billionaires & “woke mob” from turning Georgia into the next California or New York. Today, he welcomes a company whose corporate attitude is seemingly inconsistent with Georgia values. I’m asking Brian Kemp to release the details of the incentive package & how much tax payer money was used to bring Rivian to Georgia. This company is Woke. Their vaccine mandate limits the jobs Georgians can’t get, since many Georgians are not vaccinated. Not to mention they have a large focus on diversity & inclusion; including transgender benefits. Again, Kemp’s campaign promises don’t match his actions. Are you part of the Woke Mob or stopping the Woke Mob?

Oh no! vaccines! Diversity and inclusion! How horrifying! Maybe the “T” in the Rivian R1T stands for transgender, you ever think of that?

NBC News says the Rivian foofaraw represents a “a growing rift inside the GOP between its traditional pro-business wing, embodied by Kemp, and an ascendent populist wing, embodied by Perdue,” and also predicts — accurately, we’re afraid — that it “underscores the challenge the entire country will face in transitioning to a greener economy.”

In fact, the local opposition to the plant has pretty much nothing to to do with culture war stuff. With the precise planning for the facility still only in the early phases, there are a lot of local concerns about how a giant industrial development will impact the area, what with increased traffic, light pollution (the area is home to a Georgia State observatory), and potential environmental effects. Any big factory can pollute, even if it’s building a green product. Also, this is Georgia, where environmentalism is a dirty word. But even if the production process can be kept clean, a great big factory on former farmland could affect wildlife and local quality of life. If Rivian is successful and reaches its goal of producing 400,000 vehicles a year, the plant could become a hub for more manufacturing in the area. Paradoxically, until the US actually gets more clean heavy trucks on the road, the factory is sure to at least temporarily mean more pollution from diesel trucks, too.

Based on polling statewide, it seems unlikely the combination of culture war panic and local opposition to the Rivian plant will be enough to win Perdue the nomination, but the whole stupid “green is woke and bad” thing feeds off the same buttheaded resentment that has fueled dumb reactionary crap like diesel truck owners “rolling coal” (spewing thick smoke) on bicyclists and Prius drivers. So we can look forward to more of the same, no doubt upgraded to accusations that EVs promote the Gay Agenda and cause kids to read banned books. We can probably expect vandalism of solar panels, keying the paintjobs of EVs, and the occasional torching of any Teslas that haven’t caught fire on their own.

Yr Wonkette is funded entirely by reader donations. If you can, please give $5 or $10 a month to help us keep you up to date on our dastardly plot to keep the planet habitable for large mammals, even the dipshit ones.

Julia Fox was “delusional” for thinking she could help Kanye West

If there's one thing that everyone can agree on, it's that we all love a Black Friday discount....

Global sales of personal luxury goods to grow by 22% in 2022: Study