GOP Blocks Domestic Terrorism Bill Because Won’t Anyone Think About The Poor Nazis In The Military? 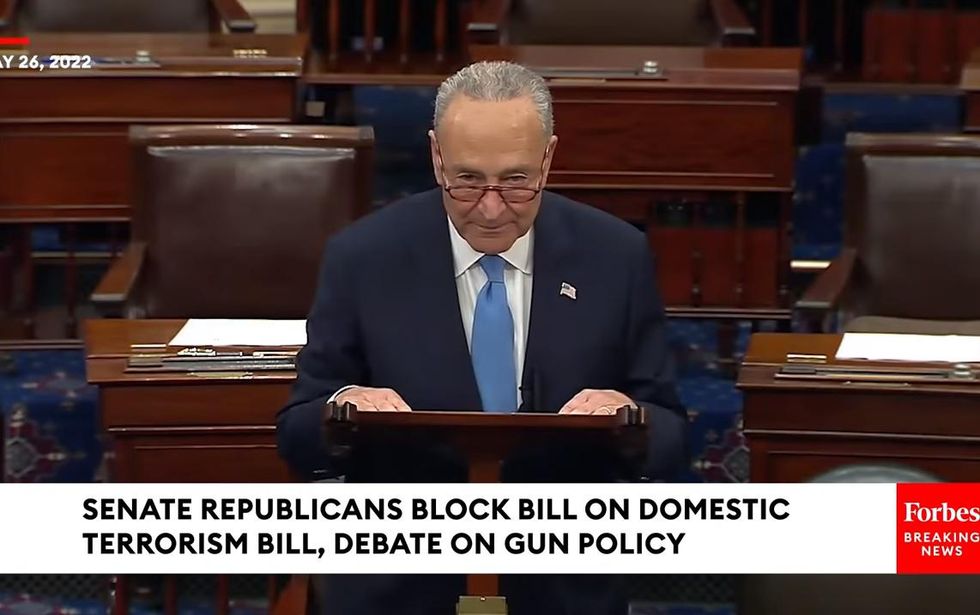 Republicans in the Senate yesterday blocked a domestic terrorism bill that was reintroduced following the mass shooting in Buffalo, New York, not quite two weeks ago, The shooter had claimed in an online rant that he wanted to kill Black people to protect white supremacy. The vote was 47 to 47 on party lines, well short of the 60 votes needed to even start debate on the bill.

The bill, first introduced in 2017 in response to the mass shootings in Las Vegas, Nevada, and Sutherland Springs, Texas, was aimed at beefing up federal agencies’ ability to monitor and share intelligence on violent extremism and white supremacist threats. Majority Leader Chuck Schumer said he had brought up the Domestic Terrorism Prevention Act so the full Senate could debate domestic terrorism, adding that it would be opened up for amendments from both parties, as a way of furthering dialogue on gun violence.

“It’s a chance to have a larger debate and consider amendments for gun safety legislation in general, not just for those motivated by racism — as vital as it is to do that,” Mr. Schumer said, imploring Republicans to allow the debate to open. “I know that many members on the other side hold views that are different than the views on this side of the aisle. So let us move on this bill. Let us proceed.”

Republicans voted to block even considering the bill, complaining variously that it was too broad and might be used to attack conservatives, and that it wasn’t broad enough because it aimed primarily at white supremacists while not doing enough to prevent terrorism by the “far Left.”

in mere reality, the bill would not have actually changed or created any federal criminal statutes at all; as the New York Times explains, it would have established

three new offices — one each in the Federal Bureau of Investigation, the Justice Department and the Department of Homeland Security — to monitor, investigate and prosecute domestic terrorism. It would require biannual reports assessing the domestic terrorism threat posed by white supremacists, with a particular focus on combating “white supremacist and neo-Nazi infiltration of the uniformed services.”

Well by golly, that upset Republicans, although in 2017, when it was introduced in the House by Rep. Brad Schneider (D-Illinois), it had three GOP co-sponsors. Last week, when the bill was reintroduced in the House, all three voted against it. Schneider said he assumed their opposition was due to the likelihood of blowback from the GOP base: “I can’t come up with any other explanation of why they’re suddenly against something that they were formerly in favor of.”

Why yes, that seems likely, given what GOP senators were saying about the bill. Sen. Marco Rubio (R-Florida), that paragon of calm and restraint, fretted that the bill would be nothing but a pretext for oppression of Republicans, who as everyone knows are already the most persecuted people in America.

The problem we have is that we have a bunch of people who define anyone they disagree with as terrorists, as extremists. […] We’ve reached a point in America now where the term ‘extremist’ is applied too liberally to people, that there’s deep concern about how these entities will be used. … That’s the concern that people have.

You know, just like how the Justice Department rounded up every parent who complained about Critical Race Theory, which didn’t happen, but it probably would have if Fox News hadn’t suggested the FBI would send snipers to school board meetings.

Is AG Merrick Garland Sending Concerned Parents To Gitmo? Well We Think He Should Stop!

Sen Rand Paul (R-Kentucky) came up with some especially florid bullshit in reactionary reaction to the bill’s provision establishing an interagency task force to root out white supremacists in the military. That’s a very real problem; extremist racists have been very open about recruiting people with military training to help them do a race war. Never mind the reality, though, because there was bloviating to do about how Democrats hate our brave military Klansmen:

“This bill would more accurately be called the Democrat plan to brand and insult our police and soldiers as white supremacists and neo-Nazis,” Mr. Paul said.

We’re hoping that perhaps some day Ron Paul can be introduced to basic logic and set theory. Why, his comments are as unfair as if we were to say that Senate Republicans are a bunch of dishonest grandstanding self-certified ophthalmologists whose every public utterance is in bad faith, when in fact Rand Paul is the only quack ophthalmologist in the bunch.

Also too, Sen. Josh Hawley (R-Insurrection Terrorist Fist-Bump) also had very serious concerns that the domestic terrorism bill would be just like that George Orwell book no Republican appears to have actually read.

“I think that’s dangerous,” Mr. Hawley said. “It’s like the disinformation board all over again,” he said, referring to a new initiative to combat online disinformation that the Department of Homeland Security paused work on earlier this month, following criticism from conservatives and free-speech advocates that it had Orwellian overtones. “I mean, that’s really what it is. But worse, it’s in legislation now,” Mr. Hawley said.

Fact check: as the Wall Street Journal points out, the bill included multiple provisions expressly stating that the new offices will have to certify they comply with all “applicable civil rights and civil liberties laws and regulations,” as if a GOP conspiracy theory fan would ever believe such a thing, because liberals are the real Nazis.

Sen. Chris Murphy (D-Connecticut) was astounded that Republicans went to such great rhetorical lengths to oppose a bill that, again, creates no new criminal laws, which suggests Sen. Murphy hasn’t actually been listening to his GOP colleagues for the last 10 years.

“This is a party that is falling apart at the seams, if their path forward is to make it easier for white supremacists to get away with crimes in this country. […] “This is a super anodyne, inoffensive, apolitical piece of legislation that just seeks to be more coordinated in taking down violent white supremacists.”

Oh, Sen. Murphy, we love you and we really do hope you can get gun safety legislation passed … but are you only just now noticing these weirdos?

Yr Wonkette is funded entirely by reader donations. If you can, please give $5 or $10 a month so we can help you cut right through all the bullshit.

21 Classic Jewellery Pieces That Are Perfect for Gifting

Where should a CDP fit in your martech stack?

Science Fiction and Fantasy Books for Fans of Nicholas Eames

Uber Reaches Settlement with Chicago Over Fees and Restaurant Listings

The LVMH 2023 Prize Launches Its Call For Entries