Bill Barr Regrets Nothing About Failed Durham Witch Hunt, Would Do Cover-Ups For Trump Again!

We continue to survey the wreckage of the laughably failed investigation led by special counsel John Durham, who was appointed to investigate whether the gremlins who live up Donald Trump’s butt were telling him the truth when they said Hillary Clinton and Barack Obama had made up a Russian hoax in order to ruin his presidency, or if — as the Mueller investigation and the then-GOP-led Senate Intelligence Committee found — the Trump-Russia collusion thing was insanely real, and as the Department of Justice inspector general affirmed, the investigation was started properly and for the right reasons.

Oh wait, just kidding, haha, we make mistake! Durham was not appointed to find out which one of those things was true. Trump’s bootlicking Attorney General Bill Barr hired Durham to start with the first conclusion and then work backward to find some evidence. And Durham has utterly, totally, hilariously failed, and whatever his reputation was before this, it’s permanently destroyed. If he’s not happy about that, he should’ve known better than to take the gig.

Now, as the credibility of the Durham investigation lay smoldering — not that it had much credibility to begin with — Bill Barr has weighed in. And because at heart he is just your Fox News-swilling rightwing moron uncle and you hate him, he regrets nothing. He’s also still lying a lot.

Look at this asshole:

\u201cBarr: I\u2019m very proud of Durham and I do take responsibility for his appointment.\u201d

JESSE WATTERS: Attorney General, do you feel any way responsible for how this Durham situation’s unfolding, and are you disappointed in John Durham?

BARR: No, I’m very proud of John Durham, and I do take responsibility for his appointment, and I think he and his team did an exceptionally able job, both digging out very important facts and presenting a compelling case to the jury.

The jury took six hours to review the evidence, come back, say “LOL” and then go out for pizza.

BARR: While he did not succeed in getting a conviction from the DC jury, I think he accomplished something far more important, which is he brought out the truth in two important areas.

Because when you’re not a real attorney general but just a partisan hack who thinks he’s the president’s personal lawyer, you’re not worried about prosecuting mere crimes. No, your work is different from all that.

BARR: First I think he crystallized the central role played by the Hillary campaign in launching as a dirty trick the Russiagate collusion narrative, and fanning the flames of it.

Ah, so Durham’s real job is creating propaganda! Got it.

Remember a few months ago when Fox News was blowing loads all over its studios over some supposed revelation from the Durham investigation, some alleged smoking gun that HILLARY FRAMED TRUMP FOR RUSSHUR? It was based on a lie about a line from a Durham filing, something from the very case Durham just lost. Amusingly, Fox News shut the fuck up about it just after Hillary Clinton said they were teetering real darn close to “actual malice.”

Let us also please remember that the real Russia investigation — the thing Barr refers to sneeringly as the “Russiagate collusion narrative,” even though as attorney general he surely knew just how completely fucking true it was — began several months before the affairs surrounding the case Durham prosecuted and lost. Durham’s case was about the DNC lawyer who tipped off the FBI that a Trump Organization server was doing weird pings with a server from Moscow’s Alfa Bank and that journalists were about to report on it. To be clear, that never ever everfuckingever was the central focus of the Trump/Russia investigation. The Trump/Russia investigation started in the summer of 2016, after Trump campaign idiot George Papadopoulos drunk-spooged all over an Australian diplomat in London about how his mysterious Maltese perfesser friend told him Russia was going to bone Hillary Clinton’s campaign right in the emails. The Australian government immediately told the FBI.

Bill Barr knows this. Bill Barr is a lying fuckweasel.

BARR: And second, I think he exposed really dreadful behavior by the supervisors in the FBI, the senior ranks in the FBI, who knowingly use this information to start an investigation of Trump and then dupe their own agents by lying to them …

But hey, that’s cool, we hear Barr saying the quiet part loud, saying in essence that Durham was successful because he gave Fox News something to cream itself over, and gave Donald Trump ammunition to keep claiming flawless victory in his campaign to prove he was framed. Most importantly, all this helped to obscure the fact — FACT! — that Trump and his campaign very much absolutely 100 percent did collude with Russia, which worked its ass off to steal the 2016 election for him. None of this was ever about the law or about justice for Bill Barr, it was about sucking the royal spray-tanned taint.

Which, you know, fine. Just say that next time, Bill. It’s a lot simpler.

The rest of the Barr interview isn’t worth your time, he just whines and moans and acts like the Durham investigation is going FINE JUST FINE, and will still get the evildoers, just you wait. Also, the DC jury was rigged because they are all gay married to Hillary Clinton. But look how mad Fox News is, y’all: 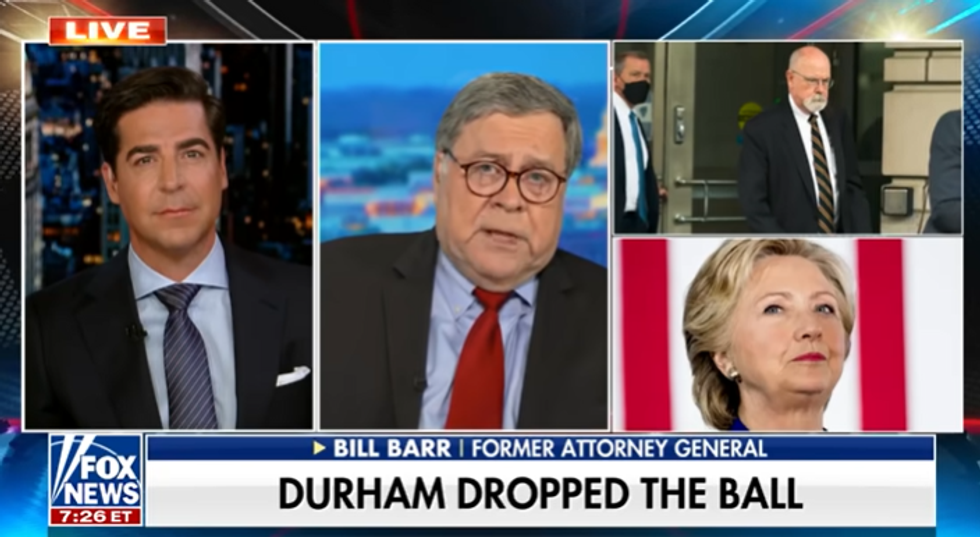 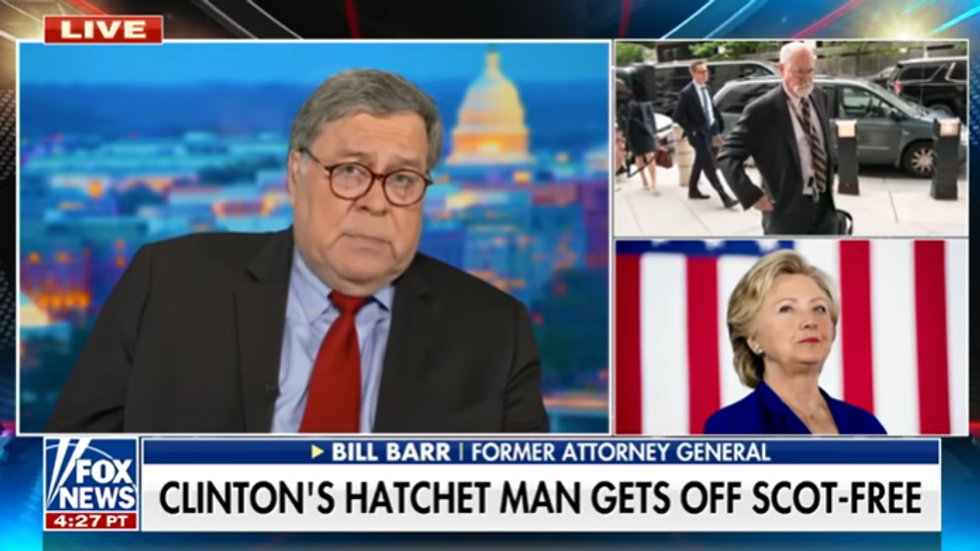 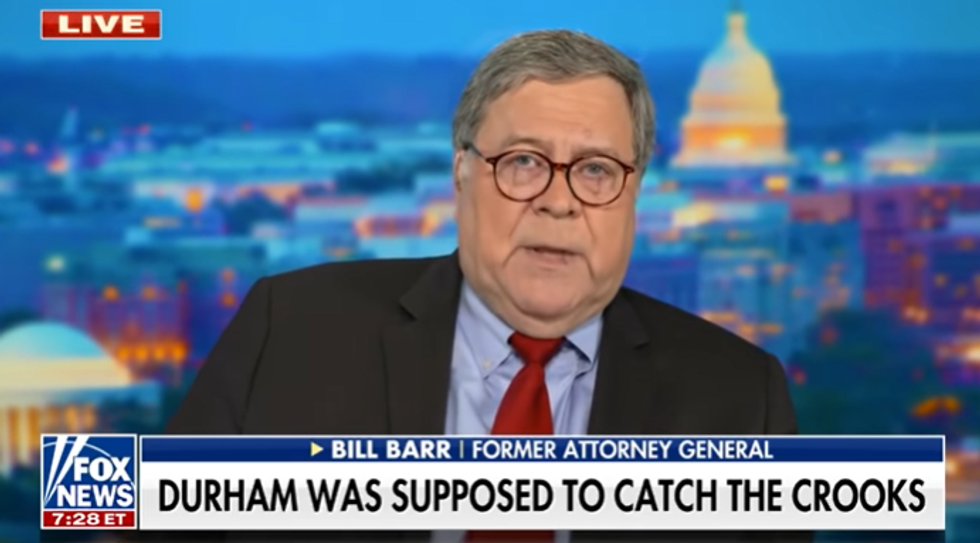 Hoo boy. For an excellent roundup of all the ways Fox News’s entire life has been ruined this week by finding out what a wet turd Durham’s fake investigation really is, Media Matters has you covered.

\u201cLike, here’s the list of government officials Fox News hoped would be investigated/arrested/jailed under the “investigate the investigators” rubric. They got… a failed charge against a lawyer no one had ever heard of. https://t.co/lqeZMBEGmW\u201d

Also read Marcy Wheeler on how this is just kinda what you get when you appoint a big hairy mustache wearing a trenchcoat to investigate not actual crimes but rather what we referred to above as sworn statements from gremlins who live in Donald Trump’s butthole and talk to him.

And remember: The gremlins talked to Bill Barr too. Clearly they still do.

Wonkette is funded ENTIRELY by a few thousand people like you. If you’re not already, would you pls consider being the few thousandth and one?

The Jonas Brothers have been honoured with a star on the Hollywood Walk of Fame.Kevin, Joe, and...