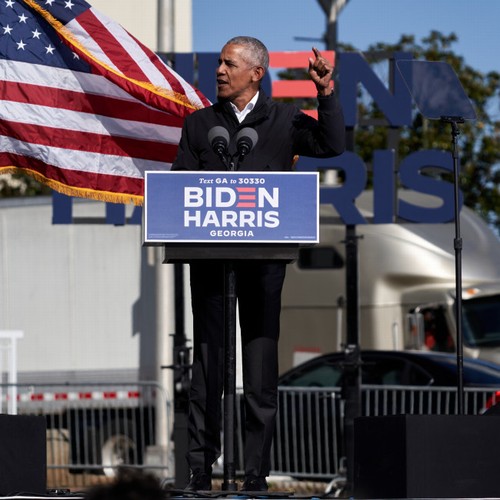 The White House has a secret record collection containing LPs by The Sex Pistols and Barry Manilow.

The grandson of the 39th president of the United States Jimmy Carter, John Chuldenko, has confirmed the existence the 97-year-old Democrat’s extensive vinyl collection from the year he got into power in 1977.

There are more than 1,800 records, including the controversial punk record ‘Never Mind the B******* s, Here’s the Sex Pistols’, which came out the same year Carter became president.

According to the Daily Star newspaper, John said: “That started me down this rabbit hole.”

Upon contacting the Jimmy Carter Presidential Library he received an email reading: “Dear John: Yes, we do have a record collection stored at a secure offsite facility.”

Records by The Beatles and Sir Elton John were also stashed away.

The collection hasn’t been touched since 1977.

Carter isn’t the only former president who is a music fanatic.

Barack Obama – who served as the 44th president of the United States between 2009 and 2017 – still to this day releases playlists of his favourite artists.

In 2021, the 60-year-old politician revealed the likes of Bruce Springsteen, Beyonce and The Beatles feature on his shower playlist.

Speaking on an episode of the ‘Renegades: Born in the USA’ Spotify Original Podcast, Obama told his co-host Springsteen: “I sing in the shower, I sing out of the shower.

“I am unembarrassed about singing … My daughters and my wife sometimes roll their eyes.”

Nine songs by The Boss made the cut, including ‘Born in the U.S.A.’ – both the studio version and a live take recorded at the Walter Kerr Theatre in New York – ‘My Father’s House’, ‘Born To Run’ and ‘My Hometown’.

The Fab Four also featured with ‘Come Together’ alongside Elvis Presley (‘All Shook Up’), Joni Mitchell (‘Help Me’), Sam Cooke (‘A Change Is Gonna Come’) and Public Enemy (‘Harder Than You Think’).

Beyonce’s ‘Freedom’ and Kendrick Lamar’s ‘King Kunta’ were also featured in the list.

Google's Latest Core Search Update is Rolling Out from Today

The 32 Best Matching Sweatsuits For Women In 2022

3 Steps To Creating A Culture Of Resilience

Lowballed, which looks at the discrimination in the housing industry

Digital content creation and management seem to be more complex than ever. Workflows now need to accommodate...

These Saye Vegan Shoes Are Comfy & Good For The Earth

Kroger-Albertsons Merger: It’s Not A Crime If You Loot *Yourself*