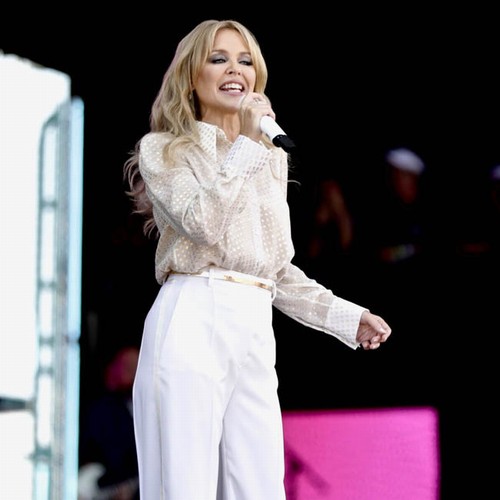 Kylie Minogue reunited with Coldplay for another live rendition of ‘Can’t Get You Out of My Head’ at the weekend.

Chris Martin and co brought their ‘Music Of The Spheres’ world tour to the MetLife Stadium in East Rutherford, New Jersey on Saturday night (04.06.22), and had a special treat in store for fans.

After performing an acoustic duet of Kylie’s 2001 hit during her Sunday afternoon Legends slot at Glastonbury three years ago, the Australian pop icon came out and did it all over again for their US fans.

Coldplay tweeted: “Thank you Kylie Minogue for letting us be your backing band.

And the ‘I Should Be So Lucky’ hitmaker responded: “Thank you Coldplay for a beautiful, joy filled night! Love you always!!!!”

Kylie has just released a remix of the noughties mega-hit by Peggy Gou.

The 54-year-old superstar teamed up with South Korean producer and world-famous DJ on a new cut of the iconic pop song for ice cream giants Magnum’s #ClassicsRemixed campaign.

Kylie said: “I can’t quite believe it’s been twenty years since I released this song! I’m a big fan of Peggy and I’m so excited for everyone to hear this remix!”

Peggy, 30, added: “Partnering with one of my musical icons to remix what is an undisputed club classic is a dream come true. From personal experience, ‘Can’t Get You Out Of My Head’ is one of those songs that transports, moves and uplifts people all over the world. Classics like this never go out of style but I’ve loved being able to put my own personal stamp on such a legendary track. To be able to bring a modern-day house sound to this legendary track shows us that classics never go out of style and I can’t wait for you all to hear it.”

The original was featured on Kylie’s eighth studio album, ‘Fever’, which featured elements of club music, disco and synth-pop.

Business Growth Secrets To Know About

Instagram Reveals How To See More Photos In Your Feed

The No. 1 Leadership Skill You Need Today Is Not What You May Think

Florida Republican Gov. Ron DeSantis is getting significant pushback for his administration's rejection last week of an...