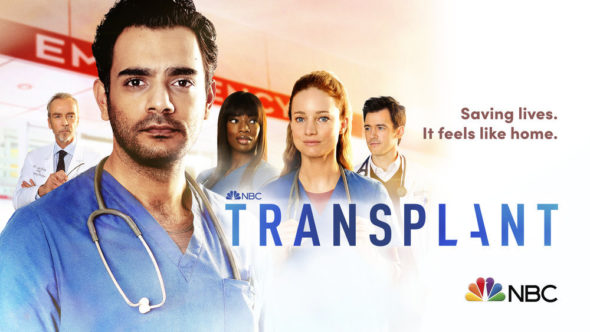 NBC started airing Transplant in Fall 2020 due to its own series being delayed by the pandemic. The drama has already been renewed for a third season in Canada and Transplant costs less for the peacock network to air than its regular shows. Will the show continue to have a home in the United States, or will it be cancelled? Stay tuned.

A Canadian medical drama series, the Transplant TV show stars Hamza Haq, Laurence Leboeuf, John Hannah, Jim Watson, Ayisha Issa, Linda E. Smith, Torri Higginson, Gord Rand, Nora Guerch, and Ahmad Meree. Doctor Bashir Hamed (Haq) is a charismatic Syrian doctor with battle-tested skills in emergency medicine. He and his younger sister, Amira (Gulamgaus), flee their war-torn homeland and become refugees, struggling to forge a new life in Canada. When a horrific truck crash nearly kills a senior doctor right in front of him, Bash saves the doctor’s life and earns a residency in the biggest Emergency Department of the best hospital in Toronto. Bash tries to meet the demands of his new country and a new job, while trying to pay the bills, raise his little sister and carve out a new life for them both in this unfamiliar land. In season two, boss Dr. Jed Bishop (Hannah) has suffered a stroke and Bash and his team must adjust to both new colleagues and new challenges.

6/5 update: You can see the latest night’s ratings in context.

For comparisons: Season one of Transplant on NBC averaged a 0.44 rating in the 18-49 demographic and 3.50 million viewers in the live+same day ratings.

Note: These are the final national ratings, including all live+same day viewing and DVR playback (through 3:00 AM). Early fast affiliate ratings (estimates) are indicated with an “*”. While these numbers don’t include further delayed or streaming viewing, they are a very good indicator of how a show is performing, especially when compared to others on the same channel. There can be other economic factors involved in a show’s fate, but the higher-rated series are typically renewed and the lower-rated ones are cancelled.

What do you think? Do you like the Transplant TV series on NBC? Should it be cancelled or picked up for a third season on NBC?

How Leaders Can Cultivate a Fighter Pilot Mindset & Fail Forward

A Look Back At Peter Jackson’s Video Nasties

Is Elon Musk the world's easiest mark for all manner of rightwing conspiracy theories and idiocy, including...

Biden Touts Economic Gains in State of the Union