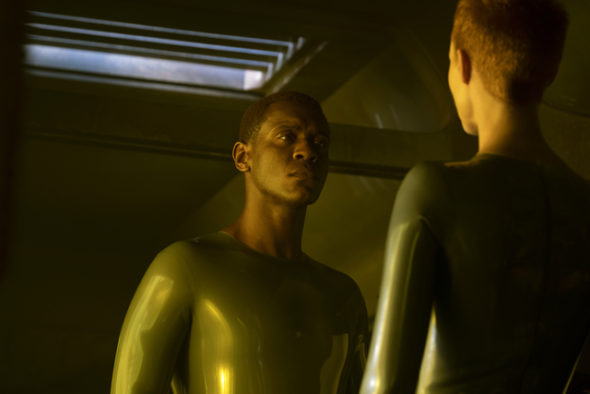 It looks like Mother and Father’s story is over, at least on HBO Max. According to one of the show’s stars, the Raised by Wolves series has been cancelled but he is asking viewers for help in getting a third season made elsewhere.

The first season debuted in September 2020 and the second season launched in February of this year. A total of 18 episodes have been produced and released.

According to Salim (pictured above), Raised by Wolves has been cancelled, a victim of the recent Warner Bros. Discovery merger. He also says that there are efforts behind-the-scenes to get the drama picked up elsewhere and a slim chance that the story can be completed.  Salim wrote:

It’s not surprising, especially after the news of the mergers and what is happening at Warner, that a lot of shows are not having their stories finished.

And unfortunately, one of those shows is Raised by Wolves.

Nothing has been publicly shared yet. And there is a reason for that. An important one. One which I’m here to share with you now. There is hope.

You see, we’re in a unique position: we have a fully fleshed out and planned storyline, a Goliath of a production team behind us, incredible reception from critics and reviewers alike, and most crucially, a community base that is so strong internationally, it can not be ignored.

The reason the cancellation hasn’t been announced, and that’s because there’s still a chance the story can continue, and be finished at a new home. This is where you all come in.

As we speak, Scott Free and the creatives are pushing for the show to be continued in other homes – sharing the reception and pull of the show to other storytellers.

There is no denying that we are in a time where the power of a communities voice can make change. There’s been many instances we’ve collectively witnessed where this has happened, few that spring to mind is The Expanse, Top Boy as well as with good ol Synder…

So I’m asking for action. I see the pure love, passion and questions (too too many) that arise DAILY on Twitter for RBW. I’m now asking that you continue to, and with even more vigour, show that genuine love here, there, and everywhere as we search for that new home.

It’s never that simple. It’s only a slither of hope, and a lot of this comes down to the die rolling in our favour. But as most of you know, I enjoy rolling the dice every now and then, and rolling “nat 20s” seems to be a thing for me 😉

So let’s give it a shot. Let’s give it our all. Let’s get that door finally open, and get the light we see of this show, flooding into other homes. That was a joke. But a serious one. #RenewRaisedByWolves

Given that HBO Max has the rights to stream the first two seasons, another outlet picking up a third season (without being able to also air/stream the previous episodes) seems unlikely.

A statement from HBO Max reads: “While we are not proceeding with a third season of Raised by Wolves, we are beyond grateful to the stellar cast and crew, our creators Aaron Guzikowski, Ridley Scott, David W. Zucker, and the entire team at Scott Free Productions, for their beautiful artistry and unique ability to immerse fans into the world of Kepler-22b.”

What do you think? Do you enjoy watching the Raised by Wolves TV series on HBO Max? Would you watch a third season on another outlet or, are you okay with the show being cancelled?

Going Global with Translated Board Books

Consumer trends will gauge the state of inflation

Why we care about marketing compliance

The 10 Most Overlooked Anthony Hopkins Movies, According to Reddit

As of January 21, 2023, Gianluigi & Rafaela Aponte was the wealthiest man in Switzerland, with an estimated...