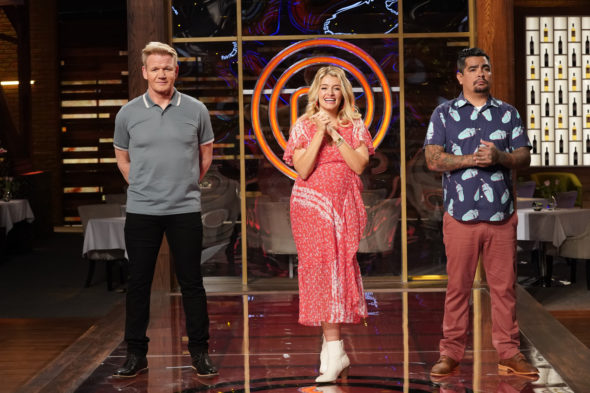 After more than three years away, will the audience remember this show? Has the MasterChef Junior TV show been cancelled or renewed for a ninth season on FOX? The television vulture is watching all the latest cancellation and renewal news, so this page is the place to track the status of MasterChef Junior, season nine. Bookmark it, or subscribe for the latest updates. Remember, the television vulture is watching your shows. Are you?

Airing on the FOX television network, the MasterChef Junior TV show features home cooks between the ages of eight and 13 years, vying for the title, trophy, and a $100,000 cash prize. Judges and mentors are chef Gordon Ramsay, chef Aarón Sánchez and nutrition expert Daphne Oz. In season eight, the pint-sized contestants cook a meal for diners at a historical renaissance fair; see how they size up to monster trucks at a motocross track; welcome Ramsay’s daughter, Tilly, for a donut challenge; and participate in a WWE-themed episode.

The eighth season of MasterChef Junior averages a 0.38 rating in the 18-49 demographic and 2.00 million viewers. Compared to season seven, that’s down by 49% in the demo and down by 29% in viewership in the live+same day ratings (which includes DVR playback through 3:00 AM). While these numbers don’t include further delayed or streaming viewing, they are a very good indicator of how a show is performing, especially when compared to others on the same channel. Though there can be other economic factors involved, the higher-rated shows usually get renewed and the lower-rated ones get cancelled. Find out how MasterChef Junior stacks up against other FOX TV shows.

As of June 6, 2022, MasterChef Junior has not been cancelled or renewed for a ninth season. Stay tuned for further updates.

Will FOX cancel or renew MasterChef Junior for season nine? The series has been off the air since June 2019 and television viewership has changed a lot in that time as more people have moved to time-shifted viewing. The ratings have dropped but, I have no doubt that MasterChef Junior will be renewed for a ninth year. I’ll update this page with breaking developments. Subscribe for free alerts on MasterChef Junior cancellation or renewal news.

What do you think? Do you hope that the MasterChef Junior TV show will be renewed for a ninth season? How would you feel if FOX cancelled this TV series, instead?

The Dog Dies in This One: An Essay About the Death of Animals in Fiction

Why is Writing Stuck in the Paper Age?

THE COMEDIANS IN CARS GETTING COFFEE BOOK