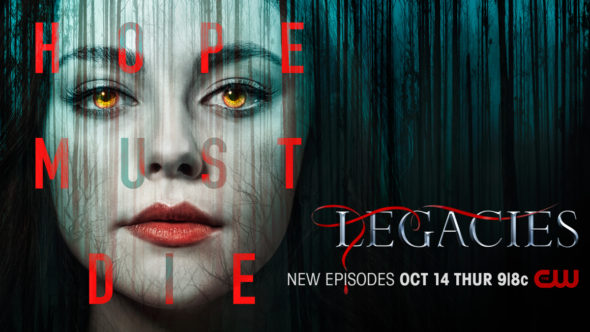 The Legacies TV show saw a big drop in the ratings last season but remained a top 10 show on The CW. Is it nearing the end of its run or will this series continue for many years to come? Will Legacies be cancelled or renewed for season five? Stay tuned. Status Update Below.

A supernatural drama, the Legacies TV show stars Danielle Rose Russell, Jenny Boyd, Kaylee Bryant, Quincy Fouse, Aria Shahghasemi, Chris Lee, Leo Howard, Ben Levin, and Matthew Davis. This show is set in the Salvatore Boarding School for the Young and Gifted in Mystic Falls, a haven for supernatural beings to learn to control their impulses and abilities. The ongoing story follows a new generation of supernatural students (like vampires, witches, and werewolves) as they learn what it means to be special in a society that wouldn’t understand their gifts. They include Hope Mikaelson (Russell), Lizzie Saltzman (Boyd), Josie Saltzman (Bryant), MG (Fouse), Kaleb (Lee), and Landon Kirby (Shahghasemi). Josie and Lizzie’s father is Alaric Saltzman (Davis), the human headmaster of the school.

6/3 update: You can see the latest night’s ratings in context.

Note: These are the final national ratings, including all live+same day viewing and DVR playback (through 3:00 AM). Early fast affiliate ratings (estimates) are indicated with an “*”. While these numbers don’t include further delayed or streaming viewing, they are a very good indicator of how a show is performing, especially when compared to others on the same channel. There can be other economic factors involved in a show’s fate, but typically the higher-rated series are renewed and the lower-rated ones are cancelled.

What do you think? Do you like the Legacies TV series on The CW? Should it be cancelled or renewed for a fifth season?

‘Amazing Spider-Man’ Becomes the Most Popular Movie on Netflix