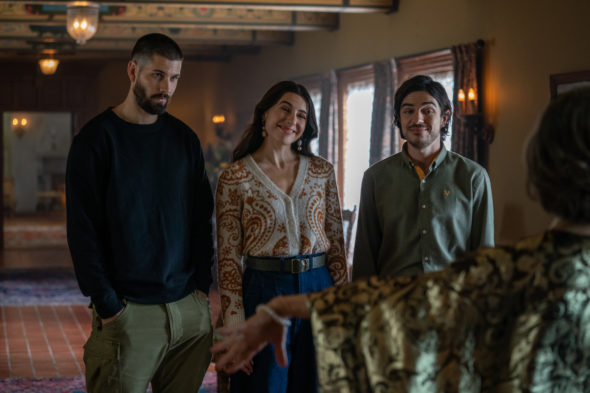 Will Murphy get it together in the fourth season of the In the Dark TV show on The CW? As we all know, the Nielsen ratings typically play a big role in determining whether a TV show like In the Dark is cancelled or renewed for season five (in this case, we know it’s already been cancelled). Unfortunately, most of us do not live in Nielsen households. Because many viewers feel frustrated when their viewing habits and opinions aren’t considered, we invite you to rate all of the fourth season episodes of In the Dark here.

A CW crime drama series, the In the Dark TV show stars Perry Mattfeld, Casey Deidrick, Morgan Krantz, Marianne Rendon, Theodore Bhat, Matt Murray, and Ana Ayora. In the series, Murphy (Mattfeld) is a messy twenty-something who struggles on a daily basis to balance her random hookups, her hangovers, and her drug front. She’s also blind. In season four, Murphy must work closely with her ex, Max (Deidrick), her best friend Felix (Krantz), and his sister Lesley (Rendon) to keep herself out of jail for her crimes. But staying out of jail proves more difficult than expected when Josh Wallace (Bhat), a Chicago PD consultant and Murphy’s ex-fling, doubles down on his obsession with Murphy. Working with detectives Gene Clemens (Murray) and Sarah Barnes (Ayora), Josh focuses all his efforts on putting her back behind bars.

What do you think? Which season four episodes of the In the Dark TV series do you rate as wonderful, terrible, or somewhere between? Do you think that In the Dark should have been cancelled or renewed for a fifth season on The CW? Don’t forget to vote, and share your thoughts, below.

3 mistakes to avoid when building a team from scratch

Grumpy / Sunshine Duo Books for Fans of Wednesday and Enid

SZA brought a couple surprises to her appearance Saturday Night Live on Dec. 3. In addition to...

3 mistakes to avoid when building a team from scratch