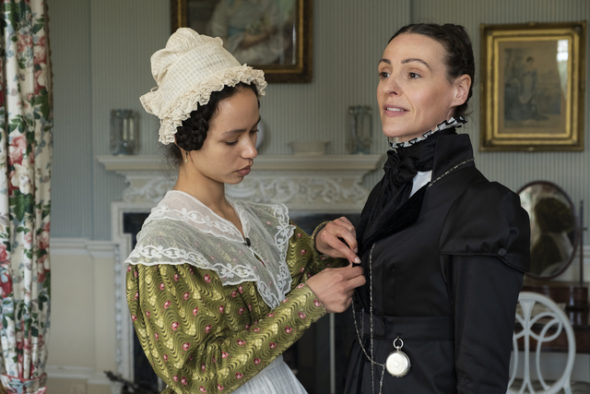 Can Anne see the danger that’s coming her way in the second season of the Gentleman Jack TV show on HBO and BBC One? As we all know, the Nielsen ratings typically play a big role in determining whether a TV show like Gentleman Jack is cancelled or renewed for season three. Unfortunately, most of us do not live in Nielsen households. Because many viewers feel frustrated when their viewing habits and opinions aren’t considered, we invite you to rate all of the second season episodes of Gentleman Jack here.

An HBO and BBC One historical drama series, the Gentleman Jack TV show stars Suranne Jones, Sophie Rundle, Timothy West, Jodhi May, Katherine Kelly, Derek Riddell, Gemma Jones, Stephanie Cole, Peter Davison, Amelia Bullmore, Vincent Franklin, Shaun Dooley, Rosie Cavaliero, Joe Armstrong, Anthony Flanagan, and George Costigan. Drawing upon the real Anne Lister’s copious diary entries (part of which were written in code), the story centers on Anne (Suranne Jones), a landowner and industrialist. She sets out to shore up Shibden Hall, her West Yorkshire family estate, by reopening the local Halifax coal mine and marrying well. The twist is, Anne does not intend to marry a man. In season two, it’s 1832 and all eyes are on Anne Lister and Ann Walker (Rundle) as they set up home together at Shibden Hall as wife and wife, determined to combine their estates and become a power couple. Anne’s entrepreneurial spirit frightens the locals as much as her unconventional love life and, with Halifax on the brink of revolution, her refusal to keep a low profile becomes provocative and dangerous.

What do you think? Which season two episodes of the Gentleman Jack TV series do you rate as wonderful, terrible, or somewhere between? Do you think that Gentleman Jack should be cancelled or renewed for a third season on HBO and BBC One? Don’t forget to vote, and share your thoughts, below.

WHAT WAS THE TURNING POINT OF THE CIVIL WAR?

The 5 types of long COVID, according to one expert

What is a conversion optimization platform?

No1 Phrase In Successful Relationships And How To Adopt It

‘The Last of Us’ Renewed For Second Season

by Trevor Kimball, February 1, 2023(Photo by: CBS Media Ventures) Phil McGraw and his wife Robin will...