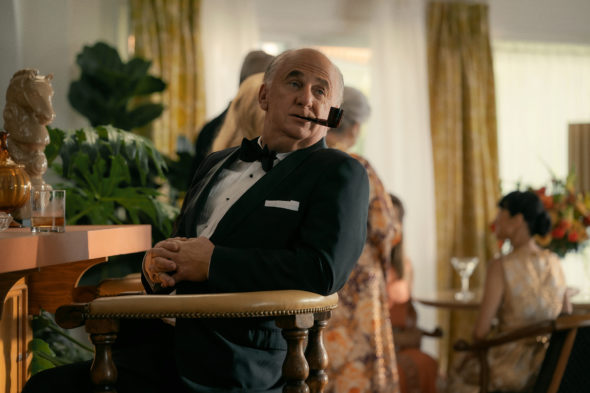 How much more is there to learn about the infamous scandal in the Gaslit TV show on Starz? As we all know, the Nielsen ratings typically play a big role in determining whether a TV show like Gaslit is cancelled or renewed for season two (in this case, the show seems like a close-ended series). Unfortunately, most of us do not live in Nielsen households. Because many viewers feel frustrated when their viewing habits and opinions aren’t considered, we invite you to rate all of the first season episodes of Gaslit here.

A Starz historical drama series, the Gaslit TV show stars Julia Roberts, Sean Penn, Dan Stevens, Betty Gilpin, Shea Whigham, Darby Camp, and Aleksandar Filimonovic. The story is told through the lens of the lesser-known but still key players involved in the Watergate scandal and the downfall of America’s 37th president. They include Richard Nixon’s subordinates, the zealots aiding and abetting their crimes, and the whistleblowers who would eventually bring the whole enterprise crashing to the ground. At the center of the series is Martha Mitchell (Roberts), a woman with a big personality. She’s a celebrity Arkansan socialite and wife to Nixon’s loyal Campaign Chairman and former Attorney General, John Mitchell (Penn).

What do you think? Which season one episodes of the Gaslit TV series on Starz do you rate as wonderful, terrible, or somewhere between? Do you think that Gaslit should be renewed for a second season with a new story? Don’t forget to vote, and share your thoughts, below.

How Tom Cruise Imbues His Action Roles With Comedy

How to use social media for brand building?