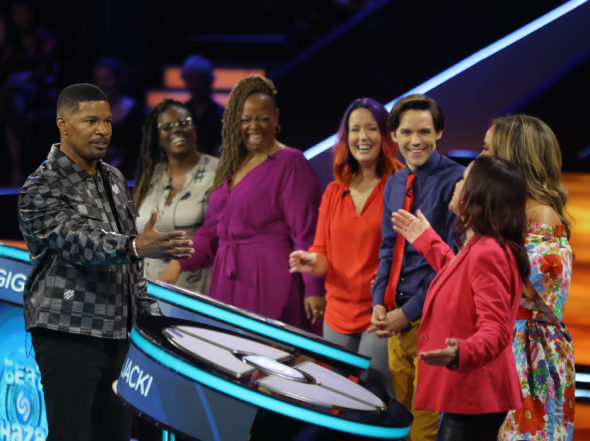 How quick will the winning contestants have to be in the fifth season of the Beat Shazam TV show on FOX? As we all know, the Nielsen ratings typically play a big role in determining whether a TV show like Beat Shazam is cancelled or renewed for season six. Unfortunately, most of us do not live in Nielsen households. Because many viewers feel frustrated when their viewing habits and opinions aren’t considered, we invite you to rate all of the fifth season episodes of Beat Shazam here.

A FOX interactive, musical game show, the Beat Shazam TV series is hosted by Jamie Foxx while his daughter, Corinne Foxx, serves as the Deejay. The competition features three teams of two players as they race against the clock, and each other, to identify song selections. During each round, Jamie Foxx presents a choice of two musical categories. The object is to be the first team to correctly identify the song’s title. While low-scoring teams are eliminated, the team which banks the most money will ultimately advance to compete against the Shazam app, for a chance to win a $1 million dollar prize. Season five includes special episodes featuring teachers, military members, firefighters, and police officers.

What do you think? Which season five episodes of the Beat Shazam TV series do you rate as wonderful, terrible, or somewhere between? Do you think that Beat Shazam should be cancelled or renewed for a sixth season on FOX? Don’t forget to vote, and share your thoughts, below.

Maverick’ and 9 More Sequels Released 10+ Years After The Original

New Romance Books to Read | May 31

Interview with Dr. Yvonne Kason MD, Author of Soul Lessons from the Light

What’s the story behind the story? What inspired you to write Soul Lessons from the Light? A...