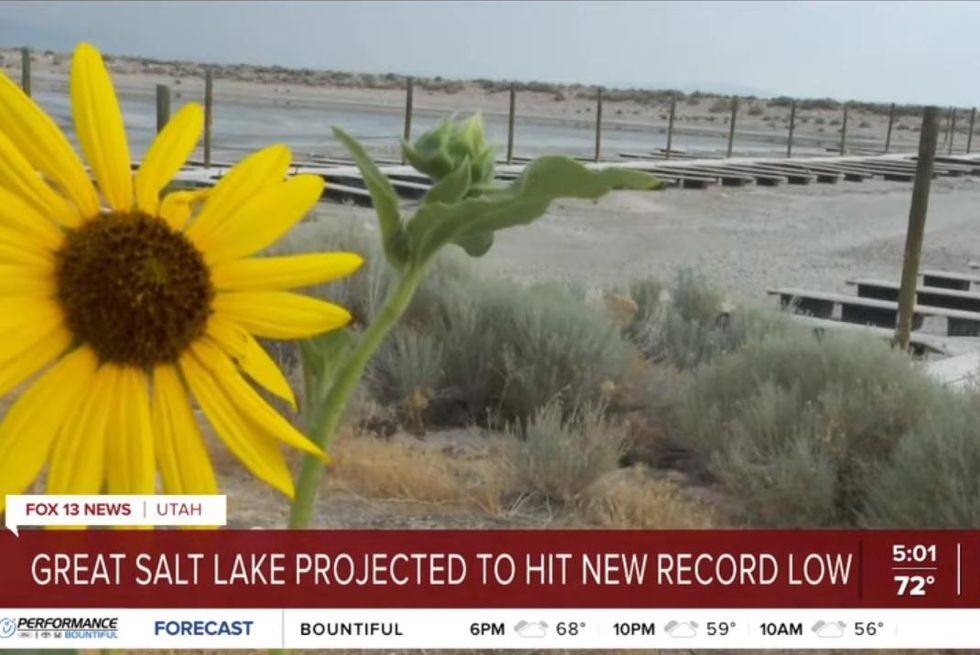 Utah’s Great Salt Lake is, like a lot of western lakes, drying up and shrinking at an alarming rate due to long-lasting drought that’s intensified by climate change. Unlike Lake Powell and Lake Mead, the Now Just Adequate Salt Lake is a natural lake, not the result of damming the Colorado River (or damning it, as Ed Abbey used to say), but the calamitous drop in water levels results from similar causes: not enough water coming into the lake from rivers, plus lots of thirsty humans and their agriculture using upstream sources. In late April, state water officials projected the lake will once again hit a new record low water level this year, a good two feet lower than the previous record low level of 4,190 feet, set just in October 2021.

The projection is based on levels that flow into the lake from its core tributaries, like the Bear, Weber and Jordan rivers. Normally those rivers add about 3 feet of water during the irrigation offseason, while there’s a 2-foot reduction once the irrigation begins. That’s a net gain of about a foot per year.

But this year’s spring runoff is not looking good for the lake. The National Weather Service’s Colorado Basin River Forecast Center announced last week that it adjusted its forecast to project a runoff at 60% of normal. It previously forecast a normal runoff at the start of the year.

Last year, instead of the usual off-season increase of a foot, the lake’s level only rose by six inches. And the state’s snowpack is far lower than normal due to the drought. Also, fun fact: because of mineral concentrations in the lakebed, the drier the lake gets, the greater the chance of toxic dust blowing into populated areas.

Yeah, that’s bad. Here, have some video from a BOAT, mofo, with more walking than there oughta be on a boat tour.

In late April, Gov. Spencer Cox declared a drought emergency for the second year in a row, since apparently his admonition last summer for Utahns to “pray for rain” didn’t quite do the job. The state legislature has passed a number of water conservation bills, including $450 million in water infrastructure projects, and also established a “Great Salt Lake Watershed Enhancement Program” that will include a new $40 million water trust aimed at helping the lake. Other measures will offer financial aid to homeowners who replace grass lawns with more desert-friendly landscaping, which seems like a smart idea.

And then there’s the plan to at least study the feasibility of building a 700-mile pipeline that would pump saltwater from the Pacific Ocean to the Salt Lake, because desperate times and all that. That’s one of several ideas being explored by the Lege’s Water Development Commission, although it’s probably the most radical one; the Salt Lake Tribune reports other ideas being studied include

The package of study items also includes one measure that might even be more desperate than “pipeline,” which would involve looking into “putting septic effluent into Utah’s water supply,” which of course sounds gross but works great if you’re on the International Space Station. It’s treated, people.

State Sen. David Hinkins (R), co-chair of the Water Development Commission, did some logic on the pipeline idea, which would require getting the pipeline over the Sierra Nevada mountains and crossing the states of California and Nevada:

“There’s a lot of water in the ocean and we have very little in the Great Salt Lake.” […]

“It’s just an idea,” cautioned Sen. Hinkins in an interview with FOX 13 News. “Other countries are doing it to fill their lakes because of the drought situations. We ought to know if there’s a feasibility or even if we’ll get right of ways for that sort of stuff, but get an idea of how much it’ll cost.”

Now, before you go snottily pointing out that lakes are freshwater, the Salt Lake Trib explains Hinkins was talking about an Israeli proposal to pipe Mediterranean water to replenish the Dead Sea, which is getting deader all the time.

Hinkins also suggested that, on the downslope run from the Sierra Nevadas, the water could even be used to generate electricity, although that sounds kind of like a perpetual motion thingy to us, since you’d expend a lot of energy getting the water up there in the first place? We’ll freely admit we are not a Doktor of Hydrostuff, though.

Lynn de Freitas, executive director of Friends of Great Salt Lake, was skeptical of the pipeline idea, and not solely the feasibility and cost of the damn thing. She argued

A pipeline would not only degrade the landscape it crosses but would also disrupt the terminal lake’s chemistry.

“Rather than bringing fresh water to a system already challenged by impacts from increased salinity concentrations, it would be bringing in even more salinity,” she wrote in a text. “What’s wrong with this picture?”

She suggested it would be smarter to reconsider a proposed project to divert water from the Bear River for municipal and industrial use, saying that project would “only exacerbate the effects of a mega drought and climate change on our Lake.”

sighed loudly and said: “Why don’t we try water conservation?”

Beyond the feasibility of it, Rep. Briscoe said he had concerns about the cost to taxpayers.

“I thought we were a state that respected frugality and efficiency,” he said. “There’s no way you’re going to be able to afford pumping saline water from the Pacific to Utah.”

Environmental advocates also criticized the idea as a “boondoggle,” as if spending billions of dollars that would enrich construction companies was somehow not the best possible use of state money. They have a point. Heck, maybe it would be a better idea to put money into reducing use of fossil fuels, just to see if not warming the planet might do something to slow the effects of drought.

Haha, like anyone could afford that! Maybe the Utah Lege could start researching the feasibility of developing stillsuits.

Yr Wonkette is funded entirely by reader donations. If you can, please give $5 or $10 a month!

Florence + The Machine Debuts at No. 1 – Billboard

See How Style Girls Are Rocking Leggings In 2023

Harry Styles will perform on the 2023 Grammy Awards, set for Sunday, Feb. 5. The announcement was...