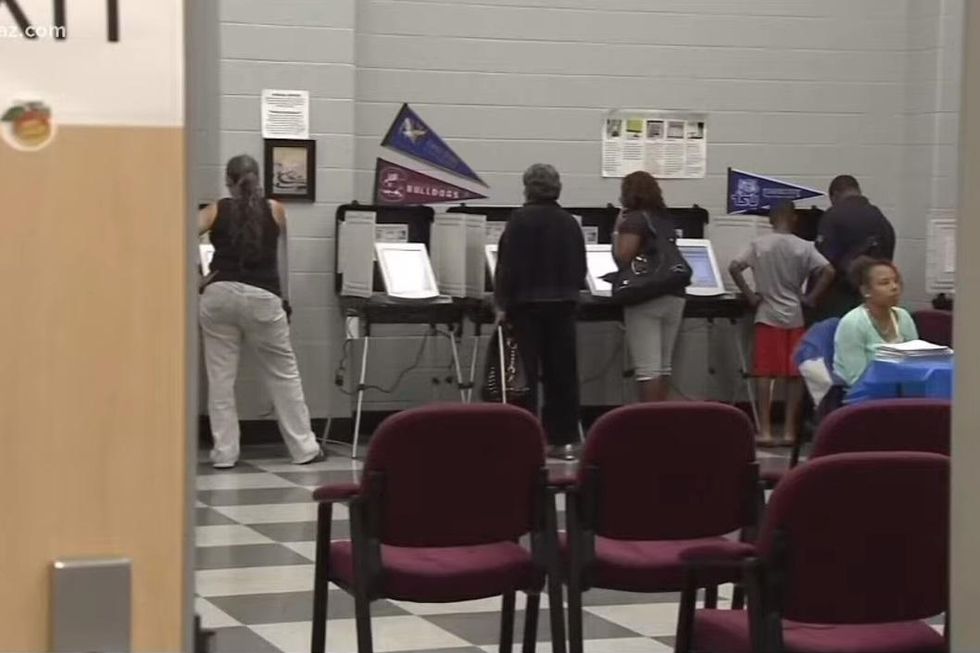 Good news for democracy in Georgia: It’s hanging on despite last year’s new election law that sought to eliminate all the voter fraud that wasn’t there in 2020. As a matter of fact, Georgia saw a surge in early voting for the primary that set new records, with over 800,000 Georgians casting primary ballots by the end of early voting. That’s more than in 2018 or even in the 2020 primaries.

Not surprisingly, that’s led to a lot of rightwing outlets crying, “See? All those Democrats who worried about ‘voter suppression’ were just lying, so the new voting laws are only making elections more secure, not stopping anyone from voting, hahaha, what a bunch of liars!”

Georgia Secretary of State Brad Raffensperger, an enthusiastic supporter of Georgia’s SB 202, insisted the record turnout was a direct result of it, because of course he would. In a statement, Raffensperger claimed the “incredible turnout we have seen demonstrates once and for all that Georgia’s Election Integrity Act struck a good balance between the guardrails of access and security.”

Mind you, the 2020 election in Georgia (and the rest of the country) didn’t actually include any noteworthy incidents of fraud, apart from the predictable Trumpers voting twice to offset what they imagined was widespread fraud by Democrats. So it’s hard to say the “security” side of things accomplished a damned thing.

SB 202 did include one measure supporters claim made voting easier: it set minimum requirements for early voting, which hadn’t been mandated previously. It’s difficult to say that change truly offset the many ways the law restricted voting — like new voter ID requirements for absentee voting; limits on ballot drop boxes; the stupid ban on groups giving food or water to people waiting in line to vote; a prohibition on local governments using outside grants to pay for election administration; and a weird ban on mobile voting vans, which forbade Fulton County from using two such vehicles it purchased for $700,000 and used only in the 2020 election cycle. Some jurisdictions also eliminated voting on Sundays, in a pretty transparent attempt to curtail Black churches’ “Souls to the Polls” voting drives, which van-pool people to vote after services.

Frankly, no, not so much.

For starters, much of the high early voting turnout for the primary elections was driven by the high-stakes Republican fights for nominations for governor, secretary of state, and for the Senate seat held by Raphael Warnock (D). As Raffensperger’s press release notes, early voting by Republicans far outweighed that by Democrats:

It’s not too surprising Democratic turnout is lower, since Stacey Abrams is running unopposed for the Democratic gubernatorial nomination, and Sen. Raphael Warnock has just one opponent we’ve never heard of. That said, yes, good turnout for the other races, indeed, but the real impacts of the new law won’t really show up until voting for the general election gets going.

For another, it only makes sense that Democratic turnout this year will be higher because many voters are pissed off at the new law, as the Washington Post reports:

Voting rights groups and Democrats say they have changed their strategies to mobilize voters under the new rules. In Spalding County, for instance, local activists moved Souls to the Polls to a Saturday, and they defiantly promised that they would work twice as hard if that was what it took to protect voter access.

“It was a direct way to send a message to the Black community that they’re in charge now,” said Elbert Solomon, vice chairman of the county Democratic committee. “But every day we get people walking through the door, White and Black. A lot of people are concerned about their democracy.”

Raffensperger claims Abrams and President Biden “lied” about the law’s impact, but Republicans haven’t exactly been explaining why measures like banning mobile voting stations do a goddamn thing to “balance security and access.” Mostly, they just cut access, and the fact that Democrats so far seem willing to redouble their get-out-the-vote efforts doesn’t change that in the least.

It’s a little too early for fans of SB 202 to be claiming it’s had no ill effects, as the New York Times points out:

The picture will grow slightly clearer on Tuesday, when Election Day turnout can be observed; clearer still in the days afterward, when final absentee ballot rejection rates and precinct-level data will emerge; and will fully come into focus after the November general election, when turnout will be far higher and put more strain on the system. […]

And again: It shouldn’t have to take an extraordinary effort to overcome the roadblocks to voting set up by the new law. If white, middle class voters can vote easily on their lunch hours, but Black voters have to take off a day from work in anticipation of hours-long lines, that’s not a demonstration of how beautifully the great pageant of democracy is working out. And that’s to say nothing of the potential fuckery that may yet arise from the provision in SB 202 that has led to GOP takeovers of local elections boards, which have indicated a willingness to reduce the number of polling places on the flimsiest of pretexts, and could do far worse, like arbitrarily disqualify voters or ballots. Gosh, not that Republicans would ever do such a terrible thing.

Assuming we had powerful enough dilithium crystals, we suppose we could settle the question of whether SB 202 suppressed a lot of votes by comparing turnout on Earth Prime to turnout on an alternate Earth where SB 202 failed because Donald Trump had been altogether repudiated.

The problem then might be that too many of us might want to emigrate to that Earth.

Yr Wonkette is funded entirely by reader donations. If you can, please help out with a monthly $5 or $10 donation!

The Stupid, It Burns … Books!

Indonesia’s fishermen rake in bigger incomes thanks to Aruna app

8 Jewelry Trends That Will Ensure You Shine Bright In 2023

6 Accessories Trends That Are In for 2023

I've said it before, and I'll say it again, accessories are magical things. There's no point in debating...