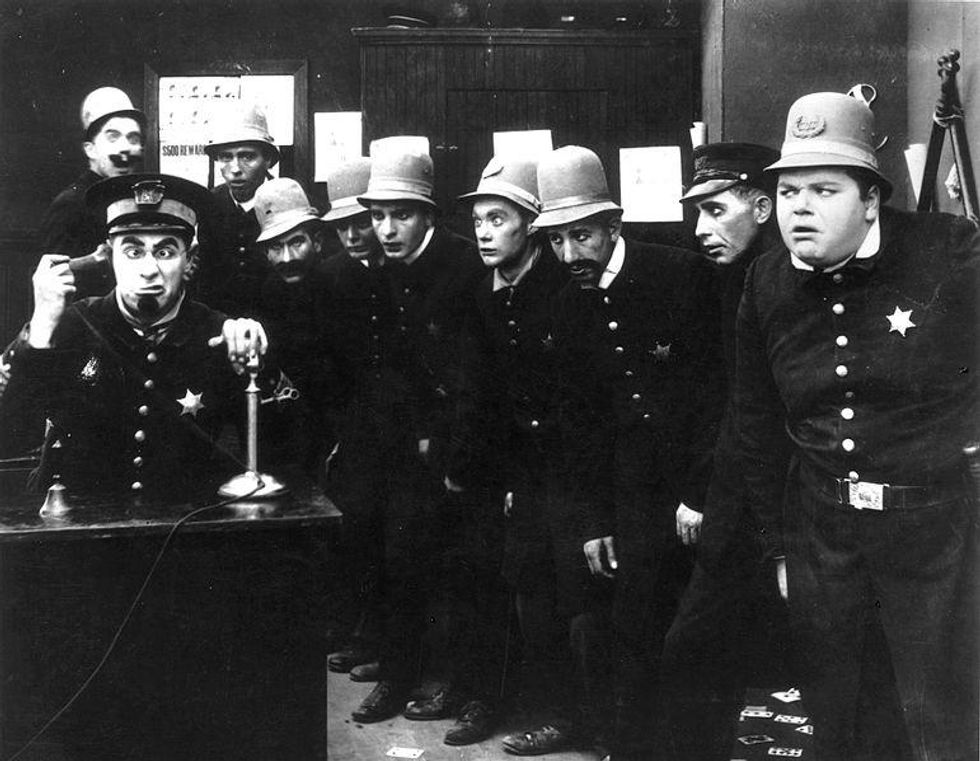 As has become a daily ritual, investigators yesterday issued yet another correction to the timeline of events in last week’s school shooting in Uvalde, Texas. Last Friday, Texas Department of Public Safety Director Steven McCraw said in a press conference that shortly before the shooting began, a teacher at Robb Elementary School had left a door to the school propped open, even after seeing the gunman crash his truck near the school. The gunman was able to enter the school because the door was propped open, McCraw claimed.

Tuesday, Texas DPS walked back that part of the story after the teacher’s attorney told a Texas newspaper that the teacher had very definitely closed the door when she saw the 18-year-old shooter headed for the door. The state police agency now says the door closed, but didn’t automatically lock as it was supposed to. What went wrong with the lock is still under investigation.

Gee, we remember thinking last Friday that it seemed awfully convenient to claim the shooter got into the school because a teacher supposedly had no regard for safety.

So Maybe Let’s Not Execute The Teacher

In Friday’s presser, McCraw said that the door “wasn’t supposed to be propped open, it was supposed to be locked. And certainly the teacher that went back for her cellphone propped it open again. So that was an access point that the subject used.”

The teacher’s attorney, Don Flanary, told the San Antonio Express-News (story paywalled) that shortly before the gunman crashed his grandmother’s pickup truck near the school grounds, the teacher had used a rock to prop open the door so she could bring food from her car to her classroom while her students were at lunch. (The teacher isn’t being identified, because Jesus Christ on a Segway, people would be trying to murder her.) The details about why she’d propped open the door at all and what was holding it open hadn’t previously been clear.

Flanary emphasized that the teacher did not leave the door propped open once it became clear the situation was dangerous.

“She saw the wreck,” Flanary said. “She ran back inside to get her phone to report the accident. She came back out while on the phone with 911. The men at the funeral home yelled, ‘He has a gun!’ She saw him jump the fence, and he had a gun, so she ran back inside.

“She kicked the rock away when she went back in. She remembers pulling the door closed while telling 911 that he was shooting. She thought the door would lock because that door is always supposed to be locked.”

He went on to say that she distinctly remembers pulling on the door’s horizontal push bar to close it. An anonymous “enforcement source familiar with the investigation” confirmed to the Express-News that surveillance video from the school shows the teacher kicking the rock away and closing the door. The source said “she slammed it shut.”

Texas DPS Chief Communications Officer Travis Considine confirmed to reporters — after the story was published — that Flanary’s account was accurate.

“We did verify she closed the door. The door did not lock. We know that much and now investigators are looking into why it did not lock,” Considine said.

Beyond correcting the claim that the teacher had acted improperly, Texas DPS also revealed yesterday that a key figure in the investigation had stopped cooperating with the state’s investigation of the utterly fuck-tussled police response to the shooting. Uvalde Consolidated Independent School District chief of police Pete Arredondo had been the “incident commander” during the school shooting. DPS said Tuesday that, after an initial interview following the shooting, Arredondo had for two days failed to respond to requests for a follow-up interview.

At last week’s presser, DPS Director McCraw largely blamed Arredondo for failing to immediately send officers after the shooter, saying the incident commander had incorrectly decided that the shooter was no longer a threat. The incident commander, McCraw said, had wrongly decided it was no longer an “active shooter” situation, which would call for any police on the scene to do everything necessary to confront the shooter and kill or disarm him. Instead, McCraw said, Arredondo had decided it was a “barricaded subject” scenario, because he was apparently unaware that children were still alive and locked inside two classrooms with the shooter. (McCraw didn’t name Arredondo in the presser, but identified him by his job title.)

Arredondo’s alleged decision meant that no police confronted the shooter for over an hour, until a Border Patrol tactical team entered the classrooms and shot him. During that time, at least 19 Uvalde city police were inside the school evacuating children and teachers from other classrooms, even as children locked in with the shooter called 911 over and over and over again to ask for police to come and help them.

McCraw had also said it wasn’t clear whether police at the scene knew of the 911 calls, although video released by ABC News Monday recorded the voice of a 911 dispatcher saying a child in the classroom reported being in a “room full of victims.” The recording was consistent with 911 call logs showing the child had also told 911 that eight or nine children were still alive in the room.

That said, given how other parts of the official narrative have needed near-daily corrections, contributing in part to all sorts of baroque conspiracy theories and disinformation, we can’t rule out the possibility Arredondo looked at the false claims made about the teacher and wants to make certain he’s extremely well-lawyered before saying another word.

Also on Tuesday, the Tribune reports,

Texas’ largest police union — the Combined Law Enforcement Associations of Texas, or CLEAT — urged its members Tuesday in a statement to “cooperate fully” with investigations into the police response to the Uvalde massacre — though they didn’t name Arredondo.

So there’s one to write home about: A police union for once is telling all its members to cooperate with an investigation, although the union also said in a statement that state officials were responsible

for “a great deal of false and misleading information in the aftermath of this tragedy,” some of which “came from the very highest levels of government and law enforcement.”

“Sources that Texans once saw as iron-clad and completely reliable have now been proven false[.]”

OK, make another note: Yr Wonkette for once mostly agrees with a police union, except for the bit about considering Texas government officials reliable.

We haven’t trusted anyone in Texas government since Ann Richards was governor, thank you very much. Let us briefly remind you that she lost her 1994 bid for reelection to George W. Bush, at least partly due to a whisper campaign that Richards was a lesbian. Texas journalist Lou Dubose wrote that the ratfucking was generally believed to be the work of Bush’s infamous campaign operative/political hitman Karl Rove, noting that “No one ever traced the character assassination to Rove. Yet no one doubts that Rove was behind it.”

In conclusion, we can only hope the Justice Department review of the police response in Uvalde is more credible than what we’ve been told so far by Texas officials. At this rate, we half expect those meddling teenagers from Scooby Doo to pull a rubber mask off Greg Abbott, revealing he was the killer the whole time. Like, literally, and not just because his gun policies have been so terrible.

Yr Wonkette is funded entirely by reader donations. If you can, please give $5 or $10 a month to help cover Dok’s treatment for mental whiplash from trying to keep all this madness straight.

Treasury Secretary Yellen Says She Was Wrong About Inflation

How Blockchain is Changing Finance

How Can Social Media Help Your Business?

How to Lay the Groundwork for a Successful Business Model

Simply Lovely! 6 Makeup Looks That Are So Easy To Do

Lowndes County and the Road to Black Power movie review (2022)

The 10 Best, Hardest to Watch Fight Scenes of All Time

Interview with Sarah Hualde, Author of A Raven Remix

While marketing organizations’ ethnic diversity continues to improve overall, it shrinks as you go up the org...

As A Leader, Can You Be Trusted?

Fauci: China’s less-effective vaccines are stopping it from exiting COVID-zero