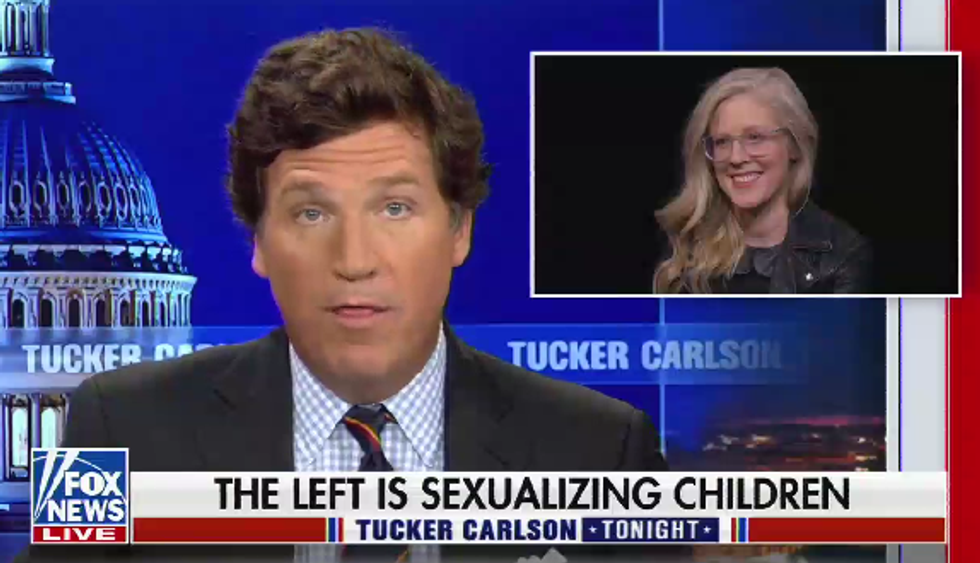 The secretary of Transportation had something to say last night.

The way this story is going, it’s looking like there will be a lot of blood on a lot of people’s hands by the time we know all the details, and the “deja vu all over again” sensation will only grow for LGBTQ people.

The authorities are starting to fill in the official blanks on the mass murder at a gay club in Colorado Springs on Saturday night and the bias that appears to have motivated it, although we still don’t have a ton of details. We know the charges the suspect is being held on include charges for bias-motivated crimes. But the way America’s most vicious purveyors of anti-LGBTQ hate are reacting, and have been reacting pretty much since the headlines started, you’d think we had a manifesto that includes their pictures and love notes written to them on construction paper with glitter.

Tucker Carlson’s show last night was a breathtaking example of the genre, which is to be expected from somebody who’s spent as much time as he has demonizing and inciting hatred against LGBTQ people, working his viewers into frothing lathers of ignorance over healthcare they don’t understand for children they hate. This is a person whose college yearbook listed him as a member of the “Dan White Society,” a club that doesn’t appear to exist but is named after the man who murdered out gay San Francisco public official Harvey Milk. This is a man who has for years bragged about that time he beat up a gay guy in the bathroom for allegedly looking at him funny.

How resentfully he complained to his viewers last night that he and they might be accused of any wrongdoing here. And he did it under the guise of his fake “stop sexualizing kids” campaign, which has absolutely nothing to do with anyone sexualizing kids, but has everything to do with inciting hatred against LGBTQ people, including LGBTQ kids.

Tucker complained in the clip above that people would make assumptions and guesses about the motive for these murders based on information we don’t have yet, saying it “would dishonor the memory” of those murdered. From a journalistic perspective, he’s exactly right. We all know what a stickler Tucker is for best journalism practices, and for making sure you don’t dishonor the memory of dead LGBTQ people. (Just to put Tucker being correct about How To Journalism in a little bit of context.)

He bitched and moaned that Joe Biden mentioned gun control against the backdrop of America’s Next Top Gun Massacre, and then focused on how his and his viewers’ free speech was being censored:

TUCKER CARLSON: So these horrifying murders in Colorado over the weekend quickly became a pretext for yet more censorship of your speech. You are responsible for this, they told you, because you said the wrong things. You are guilty of stochastic terrorism, inspiring violence by your beliefs. Anderson Lee Aldrich committed mass murder because you complained about the sexualizing of children. Every time you object to drag time story hour for fifth graders or point out that genital mutilation is being committed on minors — which it is — every time you say that, you are putting people’s lives at risk.

Whenever Tucker emphasizes that something is true, whenever he feels the need to stop in the middle of a sentence and say something like “which it is” or “this is just true,” it’s a tell that he’s not telling the truth. It’s like a nervous tic.

Does that mean Tucker knows he is actively lying to his viewers when he says that rampant “genital mutilation” is happening to children in America’s hospitals, or when he lies to the white supremacist country time windsocks who watch him about what happens at drag shows? Only he and his god know.

Tucker played a clip of NBC reporter Brandy Zadrozny, who has done some of the best reporting on the American rightwing’s violence incitement campaign against LGBTQ people, and then continued:

When you point out the truth, indisputably …

There’s that tic again. Once you notice it, you never miss it again. If we ever have an opportunity to play poker with this dude, we will end up with all his unearned fish stick riches.

and the truth is

that some adults in this country, apparently a growing number,

Here is an extended thread with many videos of Tucker Carlson talking about children’s genitals. Who has the deeply unhealthy fixation?

\u201c\ud83e\uddf5 Tucker Carlson just started his show by telling his audience that “violence and cruelty should always horrify us,” referring to the CO Springs shooting this weekend.\n\nTucker also conveniently ignored his important role in stirring up violent and anti-LGBT rhetoric:\u201d

By the way, it’s absolutely real.

You’re not imagining that.

The evidence is everywhere.

After that Tucker talked more about the Children’s Hospital in Boston, where they’ve already dealt with bomb threats incited by pigs like Tucker and the vile scum person who runs the Libs of TikTok Twitter account, over and over again accusing the hospital of “sexually mutilating kids” and saying it’s “very common.”

But of course Tucker says this isn’t an attack on gay people. No, that’s when he and the Critical Race Theory liar guy do their song-and-dance about drag queens.

So that’s what last night’s Tucker show was like.

Tucker Saying Schools And Hospitals Doing ‘Sex Crimes’ To People’s Kids, Telling Them To ‘Fight Back’

Of course, all that being said, what people really ought to read today, and during this week where Americans often pay lip service to giving thanks, is about the people whose lives were taken, and about the heroes who fought back in that club and prevented the massacre from being worse.

The New York Times interviews retired Army Major Richard Fierro, who was at the club with his wife and daughter and daughter’s boyfriend, and who fought off the gunman, beating him with the gunman’s own gun. They were there for the drag show, and just for a night out. He had never seen a drag show before. He thought it was fun. His daughter’s boyfriend was one of those murdered.

“I grabbed the gun out of his hand and just started hitting him in the head, over and over,” Mr. Fierro said.

As he held the man down and slammed the pistol down on his skull, Mr. Fierro started barking orders. He yelled for another club patron, using a string of expletives, to grab the rifle then told the patron to start kicking the gunman in the face. A drag dancer was passing by, and Mr. Fierro said he ordered her to stomp the attacker with her high heels. The whole time, Mr. Fierro said, he kept pummeling the shooter with the pistol while screaming obscenities.

CNN talked to him too.

These are the real people whose lives were ended or forever altered after they went out on Saturday night in Colorado Springs.

Like the secretary of Transportation said, if you’re a public figure who’s spent one second demonizing LGBTQ people for whatever reasons, political or personal, cynical or sincere, religious or otherwise, don’t you dare.

Ain’t nobody foolin’ anybody here.

Ben Collins is another reporter doing incredibly important work exposing these rightwing campaigns, and he said something important on the news this morning. We’ll let him close out this post.

And if that doesn’t exist, I’m also giving things a go at the Mastodon (@evanhurst@newsie.social) and at Post!

Have you heard that Wonkette DOES NOT EXIST without your donations? Please hear it now, and if you have ever enjoyed a Wonkette article, throw us some bucks, or better yet, SUBSCRIBE!

Signs that 'turnover contagion' might be brewing at your workplace

How AI Is Transforming the Insurance Industry

Global Economy Slows, but Seems to Be Faring Better Than Feared

Disney’s ‘Avatar: The Way of Water’ Cleared for December Release in China

The idea of AI-enabled OCR software might seem a little intimidating at first, but once you know...