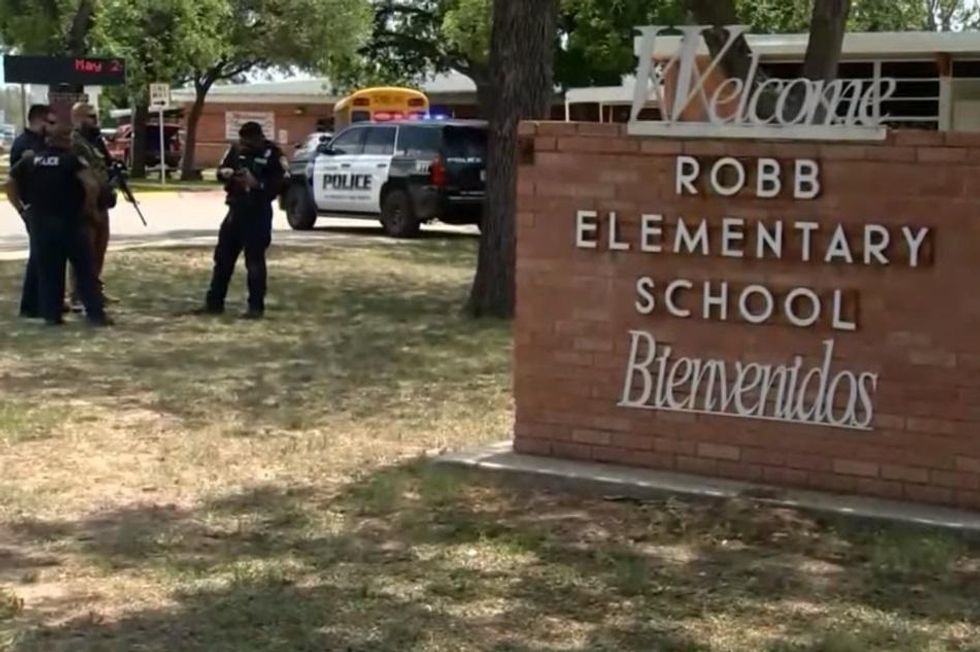 The Associated Press reports that “Frustrated onlookers urged police officers to charge into the Texas elementary school” while the shooter was inside killing 19 fourth-graders and two teachers, but that it actually took between 40 minutes and an hour before a tactical team from the Border Patrol entered the classroom and killed the shooter. The good guys with guns stood by, it seems.

“Go in there! Go in there!” nearby women shouted at the officers soon after the attack began, said Juan Carranza, 24, who saw the scene from outside his house, across the street from Robb Elementary School in the close-knit town of Uvalde. Carranza said the officers did not go in.

Remember how in 2020 the freaking US Attorney General of the United States (and all of rightwing media) insisted we needed to be more appreciative of police and stop complaining when they killed unarmed Black people, or maybe someday a terrible thing would happen and there’d be no police to save the day? Seems like that’s already the case in Uvalde, although we haven’t seen any reports that the town ever tried to “defund” its police.

Read More: Bill Barr: Support Your Local Police. Or Else.

Video posted to Twitter shows parents and bystanders pleading with cops to go into the school; most of the police and sheriffs’ deputies appear to be carrying assault rifles and wearing body armor, but they appear mostly intent on crowd control. It’s incredibly difficult to watch.

\u201c\u201cGo in there!\u201d New video- bystanders and anguished parents outside Robb Elementary in Uvalde Texas plead with heavily armed officers to enter the school while the shooting was taking place. Instead they do crowd control while the shooter was active inside for nearly an hour.\u201d

Maybe our focus is wrong here. Maybe we should be grateful none of the inaction heroes shot a parent out of fear for his life.

The Washington Post reports that while there certainly were police on the scene very quickly, they weren’t particularly kinetic in their initial response to the shooter. More like inert, which led some of the onlookers to discuss going in to try to save the town’s kids themselves. Javier Cazares, whose nine-year-old daughter Jacklyn was killed by the shooter, told WaPo he was only about a half mile away from Robb Elementary when he heard about the attack:

Within minutes, Cazares said, he and at least four other men who had children in the school were huddled near the building’s front door. Then the fathers started hearing gunfire coming from the building.

“There were five or six of [us] fathers, hearing the gunshots, and [police officers] were telling us to move back,” Cazares said. “We didn’t care about us. We wanted to storm the building. We were saying, ‘Let’s go’ because that is how worried we were, and we wanted to get our babies out.”

On the shooter’s way into the school, officials said, he “encountered” a school security officer; the AP says there are “conflicting reports” as to whether that officer shot at the killer. In addition, once inside the school, the shooter fired on two Uvalde cops, injuring them. He went into the fourth-grade classroom of co-teachers Eva Mireles and Irma Garcia, where he barricaded himself. All the fatal shootings occurred in that classroom, according to police.

At a presser yesterday, Texas state law enforcement briefers emphasized the heroism of all the responding police, which seems out of synch with witness accounts and the briefers’ own estimates of how long the shooter was allowed to go about killing before officers actually went into the room to confront him.

He “barricaded himself by locking the door and just started shooting children and teachers that were inside that classroom,” Lt. Christopher Olivarez of the Department of Public Safety told CNN. “It just shows you the complete evil of the shooter.” […]

Department of Public Safety Director Steve McCraw told reporters that 40 minutes to an hour elapsed from when Ramos opened fire on the school security officer to when the tactical team shot him, though a department spokesman said later that they could not give a solid estimate of how long the gunman was in the school or when he was killed.

As a fig leaf for what witnesses said was a too-slow response, McCraw insisted, “The bottom line is law enforcement was there […] They did engage immediately. They did contain [the shooter] in the classroom.”

Why yes, that “containment” seems to be precisely what people are furious about. Carranza, the neighbor who saw people screaming for cops to “go in there,” told the AP the cops should have gone into the school more quickly: “There were more of them. There was just one of him.”

The AP story also reports another insane detail: according to an anonymous law enforcement source, Border Patrol agents who responded to the scene were unable to break down the door of the classroom where the shooter had barricaded himself. Instead, they had to ask a member of school staff to open the door with a key. So hooray for the school having more secure doors than the average apartment where cops serving no-knock warrants easily break down doors and shoot the residents, or if the residents are lucky, just their dogs.

Stories of incredible bravery by the two teachers, and even by some of the children who died, are emerging. One of the little girls killed in the attack, Amerie Jo Garza, 10, had tried to call 911 on the cell phone she’d been given for her birthday two weeks ago. Her father, Angel Garza, is an EMT who was helping the wounded, and learned of his daughter’s death while he was treating Amerie’s best friend, who’d escaped the shooting but was covered in blood.

The Post reports that parent Miguel Cerrillo said his daughter Miah survived the shooting but was covered in blood when he got to the school. Miah had seen teacher Eva Mireles get shot. Miah then picked up the phone Mireles dropped and also called 911.

We’ll just warn you that the next two blockquoted paragraphs are painful to read, you can skip if you want.

One of her classmates also was shot, Cerrillo’s daughter said, and bleeding. She decided to lie on top of the girl so the gunman would think they were both dead. At first her friend was still breathing, but she died before help arrived, Miah said, according to Cerrillo’s account.

His daughter’s left side, from her neck all the way down her back, was lacerated by small bullet fragments, and her hair was singed by gunfire. At Uvalde Memorial Hospital, doctors disinfected and bandaged the cuts but decided against removing the fragments. Miah was discharged late Tuesday evening and spent the night seized with fear, telling her father to get his gun because “he’s going to come get us.”

We don’t know for sure that police would have made it into the locked classroom soon enough to save any of the children who died. Perhaps the little girl being shielded by another little girl would not have made it even if cops had broken down the door immediately. But the officers standing around for anywhere between 40 and 60 minutes certainly don’t appear to have saved a single life Tuesday. And if all those cops can’t stop a bad guy with a gun, how about we STFU about arming teachers, who have a pretty important job already that shouldn’t have to involve taking on anyone with an assault rifle. The guns are the problem.

There will be investigations and lawsuits. Maybe some higher-ups will lose their jobs. But why, over two decades after Columbine supposedly made “secure the perimeter” obsolete, did it take so inexplicably long for police to act?

Yr Wonkette is funded entirely by reader donations. If you can, please give $5 or $10 a month and we’ll stay angry.

Oil Giants to Be Hit by Windfall Tax in U.K.

Stock up on Audiobooks with Libro.fm’s Shop Small Sale

If there's one thing that everyone can agree on, it's that we all love a Black Friday discount....