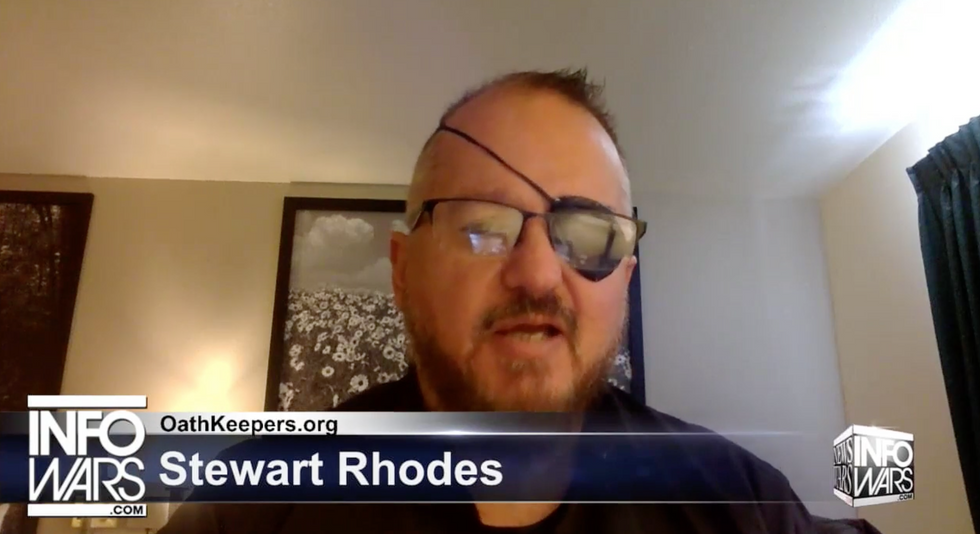 The jury in the federal trial of five top members of the Oath Keepers militia returned verdicts against the lot of them yesterday for their part in the January 6 insurrection that tried to overturn the 2020 election. The group’s leader, Elmer Stewart Rhodes, was found guilty of the most serious charge, seditious conspiracy, as was Florida Oath Keepers leader Kelly Meggs. Three other top Oafs — Thomas Caldwell, Kenneth Harrelson, and Jessica Watkins — were acquitted on the seditious conspiracy charge, but all five of the defendants were found guilty of “obstruction of an official proceeding,” i.e., Congress’s certification of the election results, and of destroying evidence.

The seditious conspiracy convictions are the most serious so far in the Justice Department’s prosecution of January 6 criminals, and mark the first time a jury has held that the attacks resulted from an organized conspiracy, not just a protest that kind of got out of hand, as Rhodes and other defendants’ attorneys had argued. More than 900 criminal cases have been brought against insurrectionists, all told.

With the three convictions, for sedition, obstructing Congress, and destroying evidence, Rhodes could face up to 60 years in federal prison. A sentencing date hasn’t yet been set.

Weirdly, as the New York Times explains, the jury

also made the confusing decision to acquit Mr. Rhodes of planning in advance to disrupt the certification of the election yet convict him of actually disrupting the certification process. That suggested that the jurors may have believed that the violence at the Capitol on Jan. 6 erupted more or less spontaneously, as Mr. Rhodes has claimed.

Rhodes was also acquitted of a separate charge of conspiracy to prevent members of Congress from discharging their duties. Rhodes was not among the Oafs who entered the Capitol on January 6.

Two of the other Oafs who did lead separate groups of rioters into the Capitol, Meggs and Watkins, were convicted on the two conspiracy charges that Rhodes escaped. Another, Harrelson, was convicted of conspiracy to interfere with members of Congress, but not of plotting to disrupt certification of the election. And of course there were the convictions all around for obstruction of an official proceeding, which can be punished by up to 20 years in prison on its own.

Well before the 2020 election, Rhodes had appeared on rightwing media outlets to brag that he and his followers were prepared to use violence to keep Donald Trump in power. A week before the vote, Rhodes said on the Alex Jones Crazytime Trucker Speed Show that he and his pretend army were ready to defend the White House from a terrorist attack on Election Day, and that they were ready to step in, especially if the Pentagon decided to “stand down” — just like at Benghazi!!!! Rhodes vowed America would never see “the antifa flag or communist flag flying over the White House.”

And by golly, he was right! What a genius!

As it happened, Election Day 2020 went peacefully, but in their opinion, voters chose the wrong guy, and Rhodes, et al., inflamed by Donald Trump’s lies that the election was stolen, decided to fix that. At trial, prosecutors demonstrated, through the Oafs’ internal communications, that Rhodes and his followers planned for the moment Trump would declare martial law and invoke the Insurrection Act, which would magically make them official members of the military somehow. This is not, prosecutors emphasized, how the law actually works.

As the Times explains, Rhodes used the Oath Keepers website to post two open letters addressed to Trump during December 2020, in which he begged Trump to invoke the Insurrection Act and Put Him In, Coach so he and other militias could

suppress the “coup” — purportedly led by [Joe] Biden and Kamala Harris, the incoming vice president — that was seeking to unseat him.

“If you fail to act while you are still in office,” Mr. Rhodes told Mr. Trump, “we the people will have to fight a bloody war against these two illegitimate Chinese puppets.”

Once January 6 came around and Trump still hadn’t done anything of the sort, the Oaves went ahead and invaded the Capitol, because that was clearly what Trump and America needed them to do. In an encrypted message to his followers that day, Rhodes wrote, referring to Trump, “I see no intent by him to do anything. So the patriots are taking it into their own hands.”

In his closing argument last week, one of the lead prosecutors, Jeffrey Nestler, said Rhodes and his codefendants had conspired against the incoming president and ignored what Americans actually wanted, because what good is democracy if your guy loses? “They claimed to be saving the Republic, but they fractured it instead,” he said.

The jury largely agreed, and thank Crom they did. Two additional seditious conspiracy trials will get started in December. One will try four more Oath Keepers, and the other will prosecute members of the White Power group the Proud Boys, including founder Enrique Tarrio. Go get ’em Merrick.

Yr Wonkette is funded entirely by reader donations. If you can, please give $5 or $10 to help us keep you up to date on all the sad failures of self-appointed “patriots” like Elmer Rhodes and his gross pals.

The new arena of tourism entrepreneurship

Books to Read if You Like The Woman in the Window