Is Sam Alito Leakier Than Dollar Store Depends? Or Is He Just Totally Corrupt? 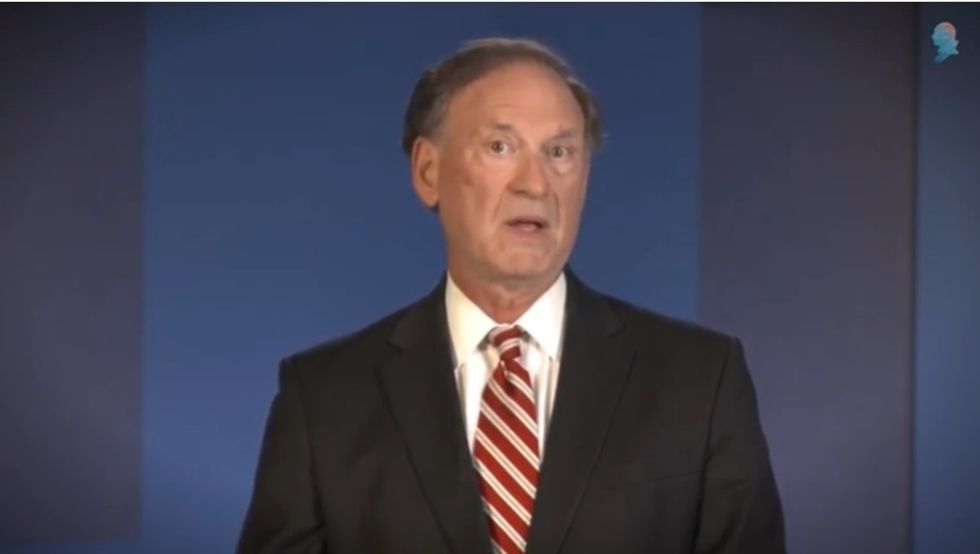 After his opinion gutting abortion rights leaked, Supreme Court Justice Samuel Alito howled that the early reveal was a “grave betrayal of trust” which put the poor, beleaguered conservative justices in fear for their lives.

“It was a shock because nothing like that had happened in the past,” he told a sympathetic audience at the Heritage Foundation. “The leak also made those of us who were thought to be in the majority in support of overruling Roe and Casey targets for assassination because it gave people a rational reason to think they could prevent that from happening by killing one of us.”

Turns out, Justice Alito’s not so unhappy about leaks, per se, as long as they’re done on the down low — but not in a gay way! — and to the right people.

Over the weekend, the New York Times’s Jodi Kantor and Jo Becker published an article with allegations by Rev. Robert L. Schenck, a former evangelical activist, detailing both his decades-long effort to influence the justices and the leak of the author and outcome of the 2014 Burwell v. Hobby Lobby decision knocking down the Affordable Care Act’s contraception mandate for “religious” corporations.

You will be FOR SHOCKED to learn that Alito himself told wealthy, Christian donors positioned by Schenck that he had authored the opinion and that they would be duly pleased with it. Yeah, don’t faint.

Schenck, who has since repudiated his anti-choice efforts, headed a group called Faith and Action, now known as Faith and Liberty, whose mission was to shower conservative justices with praise for decisions consonant with their conservative Christian worldview, explicitly injecting evangelical morality into the supposedly secular judicial process. Schenck cultivated wealthy donors able to fork over $125,000 to the Supreme Court Historical Society, which gave them access to the justices and court staff. He also coached them to make oblique references to pending cases, using phrases like “the sanctity of human life” and “We believe you are here for a time like this,” a reference to the Book of Esther, in which the Jewish queen saves her people by interceding with her husband, the Persian king.

Schenck’s most apt pupils were Ohio conservatives Donald and Gayle Wright, who managed to ingratiate themselves with Justices Scalia, Thomas, and of course Alito.

Gayle took the lead in cozying up to the justices and their wives:

“Don and I have been invited to a private party in Virginia to celebrate Nino’s 80th,” she wrote to him in a January 2016 email, referring to Justice Scalia.

Justice Alito appeared to know Mrs. Wright’s views well enough to recommend she attend a lecture at the court by Kelly Shackelford, the president of First Liberty Institute, which frequently litigates religious liberty cases before the justices. “Sam told us that Kelly is someone we should know,” she wrote to Mr. Schenck in 2013.

All three conservative justices have prayed with Schenck, but the donors could offer the judges the kind of entertainment that only a mountain of money can buy. And vice versa! Scalia routinely went on hunting trips and stayed at the Wrights’ home in Jackson Hole, Wyoming, while the Wrights were routinely invited to attend oral arguments at the Court, including on the day the Hobby Lobby decision was argued.

“We were invited to use seats from Nino and Sam,” she emailed Schenck. “Wow!”

In June 2014, the Wrights had dinner with the Alitos, after which Gayle emailed Schenck, saying, “Rob, if you want some interesting news please call. No emails.”

According to Schenck, she told him that Alito had revealed his authorship of the Hobby Lobby decision and its outcome. According to Gayle Wright, she’d gotten a tummy ache during dinner and had to be driven back to her hotel. Wow!

For his part, Alito denies the allegations, before immediately going on to paint himself as the real victim here.

“I have no knowledge of any project that they allegedly undertook for ‘Faith and Action,” he told the Times. “I would be shocked and offended if those allegations are true.”

Schenck has presented some contemporaneous email evidence of the leak, but in some sense, it doesn’t really matter. As Slate’s Dahlia Lithwick points out, the leak, assuming it actually happened, isn’t really the story here — although it does seem to have helped Schenck raise money from the owners of Hobby Lobby. The real story is the distance between the Supreme Court’s supposed role as a neutral arbiter of our laws and the grubby reality of pay-for-play access to the justices by people who call themselves “stealth missionaries.”

In the absence of a binding code of ethics, Supreme Court justices do as they please, all while howling with indignation when people point out that they’ve been captured by a bunch of religious nuts and are imposing Christian morality on the country and calling it law. And no one howls louder than Sam Alito!

“It goes without saying that everyone is free to express disagreement with our decisions and to criticize our reasoning as they see fit,” Justice Alito whined to the Wall Street Journal in September. “But saying or implying that the court is becoming an illegitimate institution or questioning our integrity crosses an important line.”

And although Chief Justice John Roberts resisted Schenck’s overtures in the main, he hasn’t exactly covered himself in glory here either. After launching an all-out investigation to find the Dobbs leaker, the Chief failed to disclose a letter sent to him by Schenck in July describing Alito’s 2014 indiscretion. And, as a letter flagged by Politico from Sen. Sheldon Whitehouse and Rep. Hank Johnson notes, he’s basically blown off congressional inquiries into the ethical conduct and code of the Supreme Court justices.

TL, DR? The mask is off now. Conservatives broke this court, and they are responsible for making it clear to all Americans that this once vaunted institution is now as dirty and political as everything else. Congrats, Mitch, you won.

Is it too early to save for your child's college?

The pandemic was a lot of things at once: a health crisis, a workforce reshuffling, a scientific...

Regional Report: Growth In The Midwest