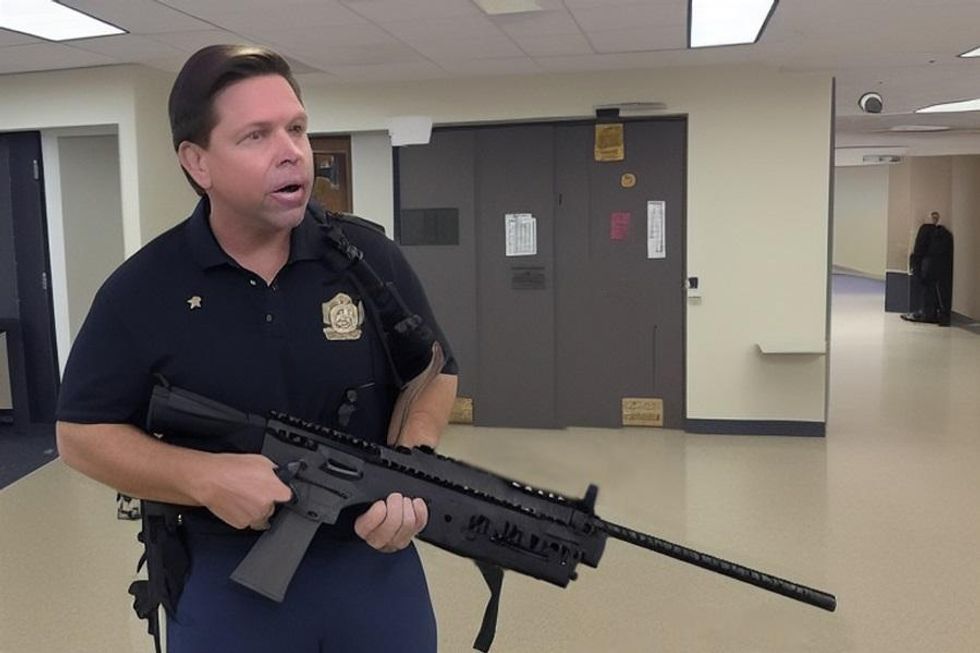 A little over a week ago, Florida Gov. Ron DeSantis shitcanned four elected members of the Broward County school board — all women, all Democrats, although school board elections are nominally nonpartisan — and replaced them with four men, all Republicans. As we noted earlier, DeSantis said the ostensible reason for suspending the elected board members was their supposed “incompetence, neglect of duty, misfeasance or malfeasance” in their administration of a 2014 school bond, according to the findings of a state grand jury report that had been released in August after 16 months of legal wrangling.

The supposed focus of the grand jury, which DeSantis requested the state Supreme Court empanel a year after the 2018 school shootings at Marjory Stoneman Douglas High School, was a statewide investigation of school safety. But As a new in-depth story in Salon details, the grand jury couldn’t actually find much of anything that the Broward school board or administration had done that actually allowed the murderer, Nikolas Cruz, to obtain an AR-15 or commit the massacre, so the supposed incompetence of the school board in contracting for school renovations, especially to roofs, became the main object of the 122-page report instead.

The big takeaway from Salon’s reporting — as we always say, go read the whole thing! — is that DeSantis has essentially leveraged rightwing Law-N-Order discourse surrounding the Parkland tragedy as a pretext for forcing his political agenda onto schools in the state’s most liberal county, even though it’s likely that some or most of the DeSantis-installed board members will be voted out in November’s general election.

Investigative reporter Kathryn Joyce notes that following the 2018 shootings, while kids who survived the massacre were organizing to demand gun safety laws, the Right settled on a narrative that blamed lax security and school discipline for the shootings, because guns are and must always be good things. The focus of much of the rightwing scapegoating was then-Superintendent Robert Runcie, who in 2011

had become the first permanent Black superintendent ever hired in the district. […] A program he helped launch in 2013, to address the “school-to-prison pipeline,” was hailed as a national model and possible inspiration for federal guidance released the following year by Barack Obama’s administration.

Clearly, any effort to address systemic racism, which doesn’t even exist, had to be at fault for the massacre, especially since the diversion program, called PROMISE, had actually worked to reduce the number of students — mostly Black and Latino kids from low-income families — arrested in schools, often for minor infractions like graffiti, marijuana possession, and all sorts of things that adolescents get into trouble over. Research has long shown that misbehavior that might result in a warning or a parent-teacher conference for white students often ends up in suspension or arrest for students of color, particularly for the catch-all category of “disruptive behavior.” Hello, school-to-prison pipeline.

As Joyce notes, PROMISE worked, which really pissed off conservatives who just know that more people of color need to be in prison.

When Runcie was hired in 2011, Broward had the most school arrests in the state, nearly three-quarters of those for misdemeanor offenses like graffiti or possessing marijuana. PROMISE proposed to replace arrests and suspensions for 13 common types of misbehavior or misdemeanors, like “minor fighting” or alcohol possession, by sending students to a temporary program at an alternative school to receive counseling and social services. Within four years, Broward’s school arrests dropped 63 percent, including, administrators said, cases like kindergartners who might have otherwise been arrested for temper tantrums.

From its inception, PROMISE was primarily aimed at helping poorer students of color access the second chances long available to students in Broward’s whiter, wealthier schools. But after Parkland, the program was targeted by conservative activists, largely led by then-Manhattan Institute fellow Max Eden, who charged that it had created a “culture of leniency” that encouraged school officials to underreport on-campus crime and misbehavior, thus allowing the MSD shooter, Nikolas Cruz, to “slip through the cracks.”

That narrative was soon all over rightwing media, with Ann Coulter proclaiming that since the shooter had been referred to PROMISE four years prior to the massacre, the Broward schools had kept him out of prison where he belonged, and had thus been part of a “school to mass murder pipeline.” She is very witty!

In mere reality, an investigative commission determined — in July 2019, long after the rightwing narrative had become unalterable gospel — that Cruz’s diversion to PROMISE made no difference to his ability to get the gun he used. He’d been caught vandalizing the handle of a school sink, and even if he’d gone into the juvenile justice system, the charge would not have prevented him from passing a background check. As the Miami Heraldreported at the time,

“The PROMISE program didn’t fail for Cruz,” Pinellas County Sheriff and commission chair Bob Gualtieri told reporters. “It would never in any way, shape, form, would’ve affected his ability to buy that AR-15, to buy the shotguns, to buy anything else, to possess them.”

He added, “It’s completely irrelevant, it’s a rabbit hole, it’s a red herring, it’s immaterial, and that’s why we’re taking it off the table and the community needs to know that that has nothing to do with what happened at Marjory Stoneman Douglas High School on February 14.”

By then, though, the Right had settled on the explanation that PROMISE had coddled a future mass murderer and told him to please express himself by being as sociopathic as he wanted. Clearly, if we would just incarcerate for life every 14-year-old who vandalizes anything, we can continue to make semiautomatic weapons easier to get than a Florida voter registration. As Joyce notes, it didn’t help that initially, Runcie had said Cruz had no connection to PROMISE, even though ultimately the investigation found it had nothing to do with the shooting.

When Ron DeSantis ran for governor in 2018, he promised to fire Runcie, although the governor has no power to do that. Runcie eventually resigned as superintendent in April 2021.

And then there’s the grand jury report, which Joyce notes uses remarkably pungent language about the board’s mismanagement of the school rebuilding funds.

the report compared the board to a “pyramid scheme,” a “self-styled illuminati” and a fish that “rots from the head down.” It called Runcie a frequent liar who “speaks with a forked tongue” and invoked Picasso, Einstein and Shakespeare to describe the entire district leadership as arrogant, dishonest and unaccountable, and in need of “a deep and thorough housecleaning” that goes beyond the board to include unnamed longtime employees “corrupted” by the district’s culture.

It’s as if the jurors couldn’t pin the shootings on the board, so the mismanaged bond funds had to stand in as a substitute. Now, there was one item that may have actually contributed to the tragedy, Joyce explains:

the grand jury charged the bond’s mismanagement included failing to upgrade fire alarm systems in Broward schools to incorporate a delay before alarms are activated, so school officials can ensure there’s an actual emergency. During the shooting at MSD, the percussion of gunfire set off such an alarm, sending students on one floor into the hallways and thus into Cruz’s path.

That’s definitely not great, but the bulk of the report focuses on the alleged mismanagement of financial matters, which may have merited action, but is a far cry from having caused the 17 deaths and 17 injuries at MSD High.

The report called for the removal of the four board members whom DeSantis replaced, all of whom had resisted calls to fire Runcie. A fifth, former board chair Rosalind Osgood, was also targeted for removal, but couldn’t be fired because she’d already left the board when she was elected to the state Senate in March. DeSantis appointed her replacement too, so his appointees now control the board and can ignore the four elected members.

Also too, state Sen. Osgood told Joyce in an interview that, for all that supposedly intolerable incompetence, one current member of the board had escaped the grand jury’s call for removal:

“Nora Rupert was the board chair during this time and voted to support all the items the other members did, but she’s not being removed,” said Osgood. “The only difference is that she wanted to get rid of Mr. Runcie.”

Gosh, that sure seems like quite the coincidence! The report also accused the board of “antipathy toward law enforcement” and other moral failings, but finally held that it couldn’t say the mismanagement of school upgrades led to the shooting — but then insisted “neither can we say they played no role in creating the darkness in which this malignancy grew.”

Now that DeSantis has his pet board majority, there’s even the possibility they may preemptively negate November’s coming elections, which could replace them, by

placing the district under an inspector general — something that has been rejected more than once in recent years, but which some MSD community members have called for. Such an inspector might not even answer to local authorities […] but rather to county or state agencies under the DeSantis administration’s control.

You know, to keep Florida safe from the liberal board members they might elect. It’s for your own good.

Yr Wonkette is funded entirely by reader donations. If you can, please give $5 or $10 a month so we can keep you on top of all the fuckery.

Google Shares the Top 100 Most Searched Products of 2022

10 Underrated ’90s Films You Can Watch On Streaming

BPO’s impact on the U.S. domestic economyA significant choice is whether to outsource corporate activities or not....

The Value of Data-as-a-Service (DaaS)