How Many Ways Did Ginni Thomas Try To Ratf*ck The 2020 Election? Oh, Just All Of Them. 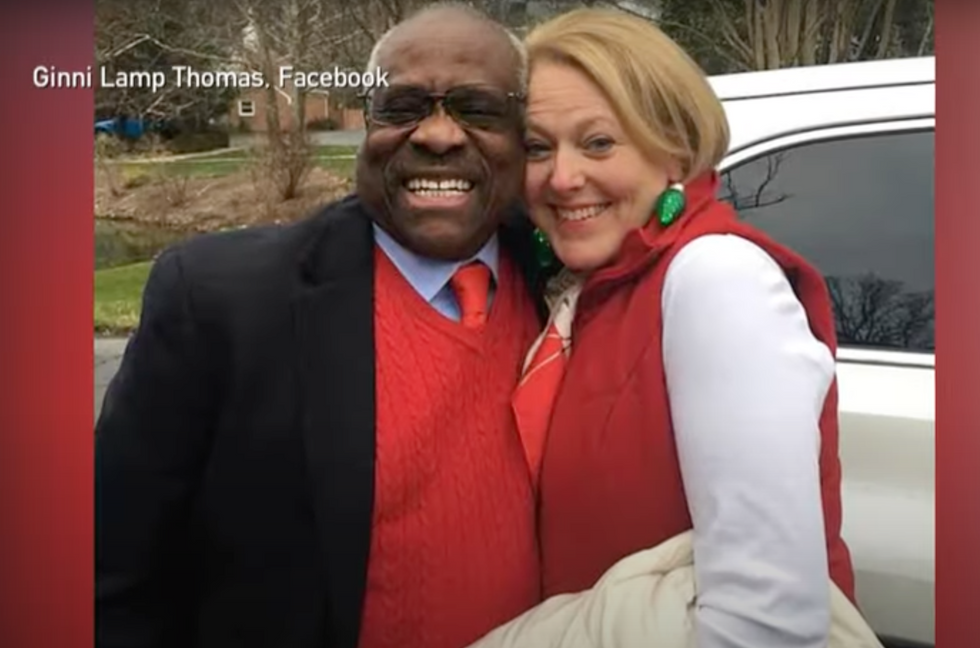 Everyone’s least favorite red-pilled auntie is back in the news for trying to overthrow a Democratic election. Again.

When last we left Ginni Thomas, wife of Supreme Court Justice Clarence Thomas and member of half the conservative political boards in DC, she was fantasizing about putting the “Biden crime family” on “barges off GITMO to face military tribunals for sedition.” This was in texts exchanged with former White House chief of staff Mark Meadows, in which she discussed various looney tunes theories about vote fraud.

“Watermarked ballots in over 12 states have been part of a huge Trump & military white hat sting operation in 12 key battleground states,” she hyperventilated, referring to a wackass theory the QAnon weirdos have been vomiting into each other’s mouths about Trump seeding the country with marked ballots and catching Joe Biden in the act of committing vote fraud at scale.

It’s really fucking crazy, but no crazier than her husband claiming to be the avatar of judicial ethics while refusing to recuse from cases pertaining to the 2020 election while his wife showed up at the pre-riot rally on January 6, was all the way up in efforts to overturn Joe Biden’s win, and may have even participated in the “War Room” events at the Willard Hotel leading up to the riot.

And on Friday the Washington Post got even more details of Ginni Thomas’s efforts to pressure lawmakers to overturn the will of the voters and steal the election.

Apparently Our Ginni got herself onto one of the sites that allows people to spam elected officials, and she sent emails to multiple lawmakers urging them to steal electors and give the election to Trump.

“Article II of the United States Constitution gives you an awesome responsibility: to choose our state’s electors,” she wrote to Arizona House Speaker Rusty Bowers and state Rep. Shawnna Bolick on November 9, despite the fact that she most definitely does not live in Arizona.

“Please stand strong in the face of political and media pressure. Please reflect on the awesome authority granted to you by our Constitution,” she went on. “And then please take action to ensure that a clean slate of electors is chosen for our state.” (Again, not her state.)

She sent a similar email to the pair on December 13, urging the pair to claw back the electoral votes actual citizens of Arizona had chosen at the ballot box: “Before you choose your state’s Electors … consider what will happen to the nation we ahttps://www.wonkette.com/fine-loretta-lynch-has-better-things-to-do-than-read-hillarys-dumb-emails-anywayll love if you don’t stand up and lead.”

Bowers never responded to Thomas directly, but he did put out a public statement on December 4 rebuking “Rudy Giuliani, Jenna Ellis, and others representing President Donald Trump” for asking him to do what Ginni Thomas had demanded. “Nothing in the U.S. Constitution or the decisions of the U.S. Supreme Court even suggests that the Arizona Legislature could retroactively appoint different electors who would cast their ballots for different candidates,” he wrote.

Bolick, who is running to be Arizona’s next secretary of state, is married to Arizona Supreme Court Justice Clint Bolick, who was mentored by Justice Clarence Thomas earlier in his career. And Shawnna Bolick did respond to Ginni’s email.

“I hope you and Clarence are doing great!” she wrote on November 10, sending her message to Ginni’s personal email directly along with information on how to report problems casting a ballot in Arizona — something Ginni Thomas would know exactly nothing about.

“Fun that this came to you! Just part of our campaign to help states feel America’s eyes!!!” Thomas responded, gleefully congratulating herself on participating in a campaign to menace legislators into overturning the election.

LOL, remember when Bill Clinton talked to Loretta Lynch for ten minutes on the tarmac, and the GOP launched a massive investigation and pretended the FBI was too BIASSSSS to investigate Hillary Clinton and lock her up in email jail?

Here’s a passage from the Post that illustrates just how wildly inappropriate it is for Justice Thomas to adjudicate an election suit regarding the 2020 campaign.

Thomas was then serving on the board of CNP Action, the political advocacy arm of the Council for National Policy. CNP Action was using its influence in Republican circles at the time to try to keep Trump in office. On Nov. 13, 2020, CNP Action held a workshop titled “Election Results and Legal Battles: What Now?” featuring, among other speakers, Cleta Mitchell, according to an agenda that researcher Brent Allpress provided to the left-leaning watchdog group Center for Media and Democracy, which published it that same month. Mitchell, a lawyer, assisted Trump in his efforts to overturn Biden’s victory in Georgia.

After that workshop, the group circulated guidance to focus efforts on legislators in Pennsylvania, Georgia and Arizona. “Demand that they not abandon their Constitutional responsibilities at a time such as this,” read the guidance, which was also obtained by Allpress and first published by the Center for Media and Democracy. It said to push for new electors “in states where constitutional rights have been violated and evidence of substantial fraud has been established.”

This is the play they’re planning to run in 2024. They want gerrymandered state legislatures to ensure that swing state ballots go to the Republican nominee, regardless of the will of the voters. Justice Thomas’s conflicts are beyond debate in light of his wife’s shenanigans, and there isn’t a damn thing we can do about it.

Well, there is one thing. We can show up at the polls in November and make sure that Shawnna Bolick and the rest of the ratfucking goons the GOP is trying to jam in there can’t get their filthy paws anywhere near the ballots in 2024.

Can we please all commit to doing that?

New Romance Books to Read if You Love Josie Silver

Interview with Ciara Blume, Author of Rome for the Holidays

On a podcast Monday, The Real Housewives scion said she has some famous — and famously not...

The Guardians Holiday Special Is Forgettable But Important