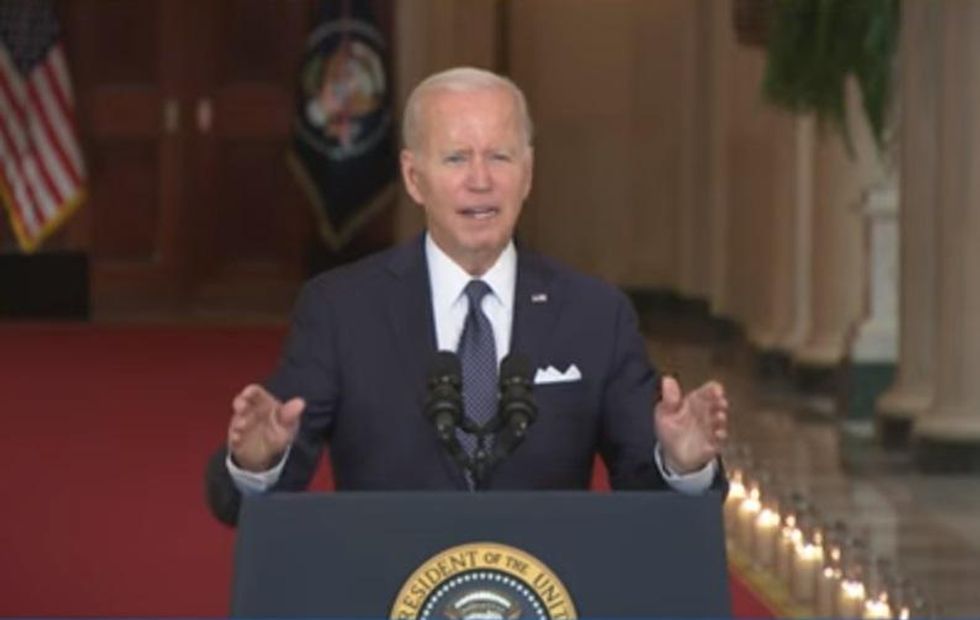 President Joe Biden gave a rare primetime speech to the nation last night in response to the recent spate of mass shootings here in the Land of the Rising Gun, noting that in addition to the shootings that have made the most news — 10 killed in Buffalo, 21 killed in Uvalde, Texas, and four killed at a hospital in Tulsa — there have also been 20 mass shootings in the week and two days since the Uvalde massacre.

The aisle of the White House’s Cross Hall was flanked by candles, in remembrance of victims of gun violence.

Biden called on Congress to pass meaningful firearms legislation, including among other measures a ban on assault weapons, or failing that, at least requiring that buyers of semiautomatic rifles be 21, the same minimum age for buying a handgun. That’s a central part of the House’s “Protecting Our Kids Act,” which was approved by the Judiciary Committee yesterday and will go to the full House for a vote next week.

In a an attempt to appeal to the sixteen remaining reasonable gun owners in the nation, Biden insisted that the measures he supports are “not about taking away anyone’s guns” or about “vilifying” gun owners; rather, he said, America should be “treating responsible gun owners as an example of how every gun owner should behave.” Heck, it was worth a shot.

But for the absolutists in the gun worship community, Biden also reminded us all that, just like other items in the Bill of Rights, the Second Amendment is not an unlimited freedom, backing the point up with a quote from Antonin Scalia and noting that for nearly 90 years, machine guns have been federally regulated, “and this is still a free country.”

We can only imagine the howls that statement got from wingnuts who are aggrieved by the existence of taxes, motor vehicle licenses, and the Civil Rights Act of 1964.

More to the point, Biden explained, the goal isn’t to take away anyone’s rights — it’s to protect the rights of all of us to have the freedom to “go to school, to a grocery store, and to a church without being shot and killed.” Biden noted recent data from the Centers for Disease Control and Prevention finding that guns are “the number one killer of children in the United States of America. The number one killer. More than car accidents. More than cancer.”

Worse, he noted, in the last 20 years, more school-aged children have been shot to death than the total of gun deaths among “on-duty police officers and active-duty military combined.” Sadly, we suspect that careful phrasing was needed to exclude the appalling rates of gun suicides by cops and among military members and veterans. Guns just make everything worse; veterans are far more likely to kill themselves with a firearm than civilians are.

Crom only knows some wingnut will look at that information and insist that we rejoice, since hooray, veteran suicides make the number of kids dying from gunfire seem perfectly acceptable. (As ever, if you’re thinking about harming yourself, please call the National Suicide Prevention Lifeline at 800-273-8255.)

“For God’s sake, how much more carnage are we willing to accept?” Biden asked. ” How many more innocent American lives must be taken before we say ‘enough’? Enough.”

Biden identified several priorities he wants Congress to act on, including bans on assault weapons and high-capacity magazines, or at least raising the minimum purchase age. Biden said he’d prefer to reinstate the 1994 assault weapons ban, which he noted temporarily reduced the number of mass shootings in the US. But when George W, Bush let the ban expire after 10 years, he said, “mass shootings tripled.”

In addition, he called on Congress to

Strengthen background checks. Enact safe storage laws and red-flag laws. Repeal the immunity that protects gun manufacturers from liability. Address the mental health crisis deepening the trauma of gun violence and as a consequence of that violence.

For each of those measures, Biden emphasized they just make sense, and on magazine capacity, he asked, reasonably,

Why in God’s name should an ordinary citizen be able to purchase an assault weapon that holds 30-round magazines that let mass shooters fire hundreds of bullets in a matter of minutes?

The damage was so devastating in Uvalde, parents had to do DNA swabs to identify the remains of their children — 9- and 10-year-old children.

Again and again, Biden’s refrain “Enough” underlined just how tired we all are of the massacres, the needless suffering, the lives sacrificed to the fantasy that more guns keep us free and safe. He noted that red-flag laws, which would allow a court to order guns be taken away from someone threatening to harm themselves or others — might have helped prevent several of the mass killings in recent years. We do wish, though, that he had more emphatically underlined that if Republicans want to prevent killings by people with mental health issues, they should be all for expanded red flag laws, instead of opposing them on the pretext that a spouse abuser needs a firearm for self defense.

Biden recalled the little girl who survived the Uvalde massacre by taking the kind of action no child should ever have to conceive of, and asked Americans to please, for God’s sake, try some empathy for her and so many others among us:

Imagine being that little girl — that brave little girl in Uvalde who smeared the blood off her murdered friend’s body onto her own face to lie still among the corpses in her classroom and pretend she was dead in order to stay alive. Imagine — imagine what it would it be like for her to walk down the hallway of any school again.

Imagine what it’s like for children who experience this kind of trauma every day in school, in the streets, in communities all across America.

Imagine what it is like for so many parents to hug their children goodbye in the morning, not sure whether they’ll come back home.

Unfortunately, too many people don’t have to imagine that at all.

And if, as he acknowledged is likely, Republicans block sensible gun laws yet again,

I believe this time a majority of the American people won’t give up either. I believe the majority of you will act to turn your outrage into making this issue central to your vote.

Yr Wonkette is funded entirely by reader donations. If you can, please give $5 or $10 a month so we can keep doing all we can to drag this damned nation of ours in the direction of sanity.

Look At All These F*cking Jerbs!

20 of the most anti-inflammatory foods you can eat to improve energy, mood, and sleep

Chinese spy balloon has been spotted over the U.S.

Wingnuts Mad At Xbox Because Saving Energy Is ‘Woke’

Style-wise, the Grammys stand out from the rest of the award shows. Whereas Hollywood’s finest like to...