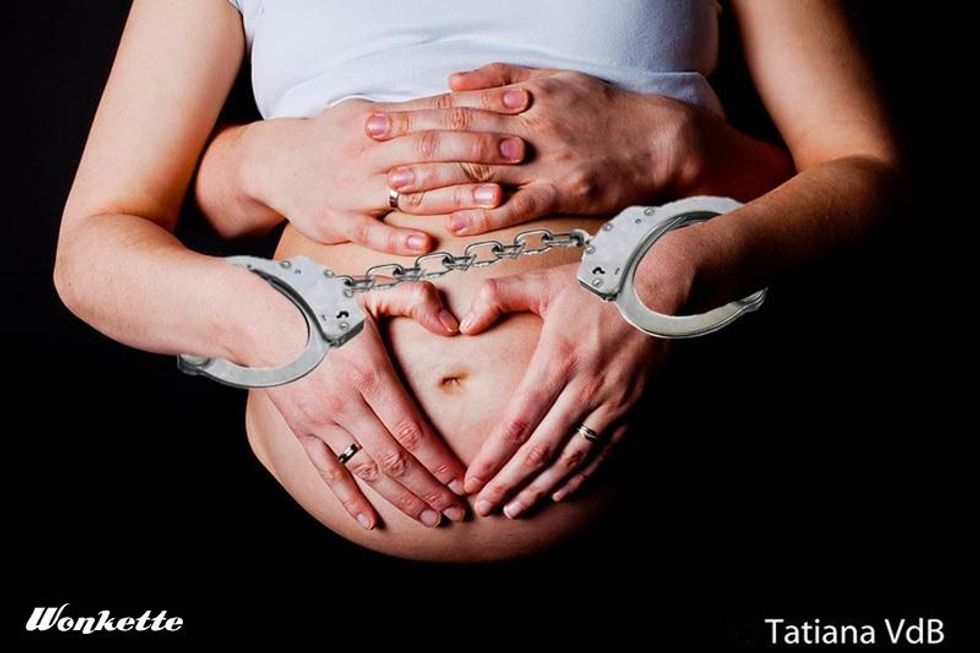 In a story that reads like it properly belongs in Margaret Atwood’s dystopian novel The Handmaid’s Tale, the Birmingham News reports that authorities in Etowah County, Alabama, have taken to jailing pregnant women who test positive for drugs, sometimes for months, on the pretext that their fetuses must be kept safe from the women’s drug use. Some women have also been kept locked up even after giving birth, too. The only way to escape the tender mercies of the county jail is for the women to come up with $10,000 in bond money and to attend inpatient drug treatment — and if they don’t medically qualify for that level of addiction treatment, they’re just left in jail.

Yes, this is the jail where the previous sheriff served inmates rotten food so he could spend the “extra” on his beach house.

The jail’s practices go against all recommendations by experts on maternal and fetal health, but that doesn’t appear to have given county authorities any second thoughts, because they’re on a mission to protect precious babies, even if that requires ignoring what stupid liberal “experts” think. After all, “experts” say all sorts of crazy true things, like “vaccines prevent COVID deaths” and “you should wear your seatbelt,” now don’t they?

The story profiles several women who’ve been kept locked up in Etowah County while they were pregnant or shortly after they’d given birth. The piece leads with the case of 23-year-old Ashley Banks, who was arrested back in May for possession of marijuana and having a pistol with no carry license. (We’re mildly shocked that Alabama has somehow kept any of its gun laws.) Normally, such low-level misdemeanors would result in being charged and allowed to wait at home until trial, but there was a catch:

Banks admitted to smoking pot on the same day she found out she was pregnant – two days before her arrest. In Etowah County, that meant she couldn’t leave jail unless she entered drug rehab, leaving her in limbo for three months.

You see, because she didn’t actually qualify for inpatient rehab as required by her bond conditions, she had to stay in jail, even though no rehab facility considered her an appropriate patient — she wasn’t addicted to hard drugs. So Banks was locked up through August 25, when she was finally released to community corrections.

But wait! There’s more, and it puts the lie to the pretext that any of this was in the interest of her or her fetus’s health.

Banks has a high-risk pregnancy due to a family history of miscarriage. She said she was jailed at around six weeks of pregnancy. About six weeks into her incarceration, she started bleeding and was taken to Gadsden Regional Medical Center, according to court documents. Doctors diagnosed her with a subchorionic hematoma, a condition where blood pools near the wall of the uterus.

The condition increases the chances of miscarriage and preterm delivery, according to the Cleveland Clinic. Banks said jail officials told her she could sleep on the bottom bunk because of her high-risk pregnancy. However, her cell had one bottom bunk and two women assigned to sleep in it. So, the other woman used the bed, according to court documents, and Banks slept on the floor.

She continued to bleed for five weeks in jail. She said she also suffered from hunger and fainting spells.

The paper’s investigation found that, according to jail records, at least seven pregnant or postpartum women were locked up between April and August, although it may have been more. Jail officials wouldn’t answer questions about how many pregnant women were incarcerated.

One doctor who wrote an affidavit urging Banks be released, Dr. Carolyn Sufrin of Johns Hopkins University School of Medicine, wrote that if the goal is to protect Precious Babies, Etowah County was doing it wrong:

The stress and conditions in jail and prisons, including lack of consistent access to standard prenatal care and mental health care, poor diets, poor sanitation, infestations with bugs and vermin, poor ventilation, tension, noise, lack of privacy, lack of family and community contact, can be detrimental to physical and mental health which can result in poor pregnancy outcomes for both the mother and the baby.

Maybe, but clearly county officials considered it far more important that Banks and her baby be endangered by being in jail over the risk that she might smoke marijuana.

The story also recounts the experience of Hali Burns, who was arrested six days after giving birth to her second child. While she was pregnant, she tested positive for meth and for a drug used to treat pregnant women with substance abuse disorders. Her attorneys say the methamphetamine test was a false positive and that she had a prescription for the other drug, but since she hasn’t actually been before a judge in that matter, she’s still jailed after two months.

That means that, apart from a brief visit to her baby in the NICU before her arrest, Burns has had no contact with her son during the postpartum period that those pesky child development experts say is crucial to bonding between a parent and a newborn. Hell, if you listened to experts, you might let an accused drug user out with an ankle monitor so she could parent her newborn and her daughter. Her boyfriend, Craig Battles, is at least able to care for both his children, although he’s worried about Burns and the kids; he said, “My little girl keeps asking what she did wrong and why she can’t come home.”

Oh, yes, and experts even think jail is no place for women who’ve just given birth, making all sorts of excuses for accused drug criminals just because they’re still recovering from the pregnancy and delivery. Banks said that since the jail wouldn’t let him give Burns underpants and pads to keep her from bleeding into her clothes, she instead had to make do with “stuffing paper towels or toilet paper in her pants to stop the bleeding.”

OK, but again, if jails aren’t hellish, how will people accused of crimes ever be get the punishment they deserve before they’re actually put on trial?

One of Burns’s attorneys, Morgan Cunningham, noted that the purpose of pretrial detention is to protect the public and make sure defendants show up for trial, so it makes little sense to require rehab as a condition of release for drug offenses. He said he’s had “reckless murder cases where defendants have been released on bond,” so a (questionably) positive drug test and a $10,000 bond for Burns probably won’t improve public safety.

Burns had been scheduled to start rehab on August 18, but failed a drug test in jail the day before that, meaning she was unable to go to rehab.

We repeat: She couldn’t go to rehab because she tested positive for drugs.

Burns’s petition for release was then denied at an August 19 hearing; Etowah County Circuit Court Judge Sonny Steen explained it was for her own good:

“The purpose of bond in any criminal case is not only to ensure a Defendant’s appearance at trial, but also to protect the community,” Steen wrote in his order. “The court has a duty to consider the safety of the children and others within our community. It is undisputed that the petitioner needs substance abuse treatment; she would have been placed in said treatment facility on Aug. 18, 2022 but for her positive drug tests the day prior.”

Another lawyer representing Burns, Martin Weinberg, said that Burns was in far more danger of using drugs again in jail than she would be at home, since drugs are easily acquired in jail and she’s an emotional mess at being separated from her kids.

The story notes that research by Dr. Sufrin, of Johns Hopkins, has found that incarcerated women are far more likely to suffer miscarriages and to have babies with lower birth rates than the general population. Keeping pregnant women in jail could even lead to their facing even more serious charges. That’s because, as AL.com details in a separate horror story, Alabama law allows charging women with neglect and even manslaughter if they miscarry or have a stillbirth following drug use during pregnancy — with prison terms up to 99 years.

Etowah County is apparently all in on criminalizing pregnant women, because it can. You know, for the good of … well, not the women or their children, but at least they’re proving how tough they are on crime, so that ought to keep anyone from ever using drugs while pregnant again.

Now all the state needs to do is to find a way to get the results of all pregnancy tests, so women can be locked up and kept from leaving the state for an abortion.

Yr Wonkette id funded by reader donations. If you can, please help with a monthly $5 or $10 donation so we can do the day drinking this story has earned us.

GSI Exchange: Innovation And Customer Safety Are Essential To Establish Your Business In Volatile Markets

Google Shares the Top 100 Most Searched Products of 2022

Is it too early to save for your child’s college?

You can’t tell people what they should think about your business, but you can influence their perception by updating...

28 Gifts From Mulberry at the Top of Our Wish List