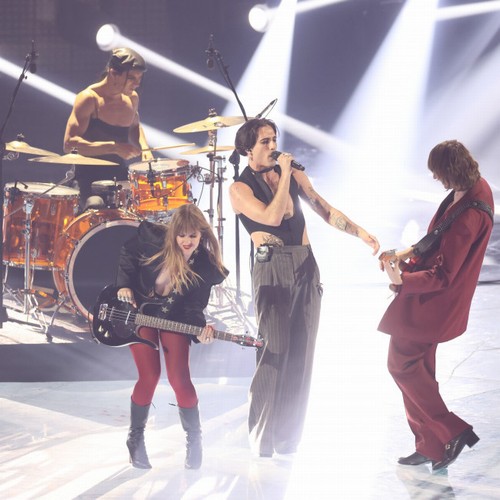 Rockers Maneskin felt “proud” to have been asked to cover one of Elvis Presley’s classic songs for Baz Luhrmann’s new movie biopic.

The Italian ‘Eurovision Song Contest’ winners are along the acts who have recorded tracks for the soundtrack of new film ‘Elvis’ which tells the story of The King’s rise to fame – and they were asked to tackle big ballad ‘If I Can Dream’.

Frontman Damiano David told NME.com: “We were talking about it with Baz Luhrmann, who had this really cool, super-smart idea, because it would have been so easy to give us an up-tempo song and go super rock-ish.

“He saw that between the lines that we were going to be able to give something else to show the sweet side of Elvis. I think we did a great job!”

David then added: “The meaning of the song is very contemporary: ‘If I can dream of a better land/ Where all my brothers walk hand in hand‘. It’s about uniting, it’s about peace, freedom and happiness, and it’s coming out at the right moment. We’re really proud of what we did, and to be part of this project. I have a feeling it’s going to be amazing.”

Guitarist Thomas Raggi then said: “Elvis is an amazing artist, so it was great to just be able to contribute and pay tribute. We recorded the song in a really special moment during the writing sessions for the album.”

Other artists who have contributed to the soundtrack include Eminem, Tame Impala, Stevie Nicks and Jack White.

The film stars Austin Butler in the title role and the actor has also recorded some of Elvis’ songs for the film, while there will also be some of the legendary musician’s originals included in he movie.

Top Universities In The World For Studying Automotive Engineering

Why Community Is The Last Great Marketing Strategy

6 Proven Reasons Why To Use Toner On Your Face

Miley Cyrus’ ‘Flowers’ Set For Week Four at No. 1 – Billboard