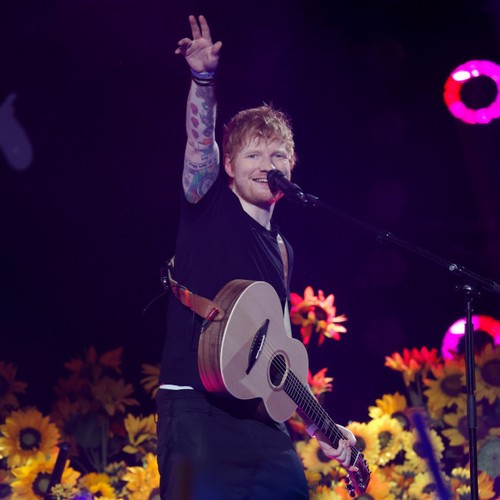 Ed Sheeran’s new song appears to detail his crippling anxiety before he proposed to Cherry Seaborn.

The singer’s track ‘One Life’ – among four releases on the deluxe version of his Equals album – seems to follow the moment he asked his 30-year-old childhood sweetheart to marry him in 2017.

Sheeran has previously revealed he popped the question under a pergola in the garden of his sprawling Sussex estate after the couple enjoyed a bottle of wine.

He says in emotional lyrics on ‘One Life’ he felt “so nervous” before getting down on one knee at his home in East Anglia,

In the first verse, he sings: “It’s such a beautiful night to make a change in our lives / East Anglian sky, empty bottle of wine.”

He adds he’s “lucky” to be spending the evening with his girlfriend, before admitting his nerves ahead of his romantic proposal.

Sheeran goes on: “Why am I feeling so nervous when things are going so perfect? / But I know that it’s worth it to spend forever with you.”

In the chorus, Sheeran reveals his anticipation for an answer in the words: “So I’ll ask you (Tonight) / Will you marry me? / Just say yes / One word, one love, one life.”

The rest of the song gushes over how emotional Sheeran felt after Seaborn said yes and admits they both got tearful.

He added in the track’s outro: “Some things were just meant to be.”

The pair tied the knot in 2019 and welcomed their first child Lyra Antarctica Seaborn Sheeran in August 2020, with their second child arriving this month.

Sheeran has previously said his wife was so shocked when he proposed to her she asked: “Are you f****** joking?”

Speaking on the Swedish talk show Skavlan about the proposal, Sheeran said: “I was getting down on one knee and I said, ‘Will you marry me?’

“It is the most human I have ever felt because in my career. Sometimes you find it is like, ‘Can I do this?’ and people are like, ‘Yeah’.

“You kind of get to a point where it becomes normal and then you are in a situation where you are literally on your knees being like, ‘Will you marry me?’

“It is such a huge life decision someone has to make in the blink of an eye. Thankfully, she did say yes.”

He added about the weather during his proposal: “On the day it was p***ing down with rain and I’d built a f****** pergola at the end of the garden to do it. “Sunset, pergola, some wine… and it was p****** down with rain.

“Time was ticking. There was a date engraved on the ring and I was like, ‘I’ve got to do it today!’

Sheeran, said to be on his way to becoming Britain’s first billionaire musician after another bumper year saw his fortune boosted by £40 million to around £260 million, took to Instagram this to announce the news he and Seaborn had welcomed their second child by posting a picture of a white pair of baby booties.

Seaborn was last seen in public in February when she attended the BRIT Awards with her husband.

The couple were childhood sweethearts after growing up in the same town.

They rekindled their romance in 2014 and tied the knot in a small ceremony five years later.

Viola Davis honored with Women In Motion Award in Cannes

Why Is Contextual Marketing So Important?

Jeff Zients reportedly will be Biden’s next chief of staff

by Colleen Hoover ‧ RELEASE DATE: Jan. 18, 2022 After being released from prison, a young woman...

WOLFGANG IN THE WILD | Kirkus Reviews