THE MAN BURNED BY WINTER 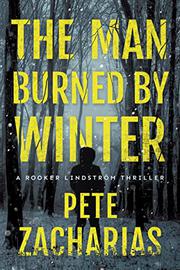 Rooker Lindström has always had an unhealthily close relationship to mortality. His father, Gunner, was a notorious serial killer who abducted and beheaded at least 14 young women before he was caught and died in prison. His son, Britton, was killed and mutilated in turn by Tate Meachum, the Madman, whom Rooker helped track down when he was a crime reporter in California. Now returned to his childhood home to get away from it all, he’s drawn a little out of his shell by his neighbor Evelyn Holmberg during a night of carnal pleasure and by Detective Tess Harlow, of the Itasca County Sheriff’s Department, who wants his unofficial help in identifying an apparent copycat who’s honoring Gunner Lindström’s example by claiming another four victims—no, make that five and counting. Small wonder that Rooker’s convinced that “the past is coming back to haunt me.” The relationship between the two sleuths is ruled by mutual suspicion, and several other members of Tess’ team are vocally unhappy with Rooker’s participation since they still suspect him of complicity in either that first round of homicides or the present reprise. Zacharias ladles on the hero’s isolation and angst and the icy rage of the killers, one of whose point of view he repeatedly adopts, but mercifully spares the flashbacks that might have turned his first outing into torture porn. As early as the title page, it’s clear that a series is planned.

Growing Your Audience (And Your Revenue) With A Book

Iggy Azalea has a laugh in red bikini for photo shoot

HubSpot to cut around 7% of workforce by end of Q1

This afternoon, HubSpot announced it would be making cuts in its workforce during Q1 2023. In a...