RUBY AND THE ITSY-BITSY (ICKY) BUG 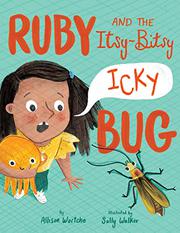 Ruby loves animals, particularly furry and ocean-dwelling ones. But bugs? No thanks. Ruby awakens to find a large bug outside the window. Ignoring Mommy’s suggestion to study it like a scientist, Ruby instead attempts to shoo the bug away by screaming at it, but it stays put. Worse, the screaming lands Ruby in timeout. This works out well, however, because, left alone with the visitor, animal aficionado and nascent scientist Ruby reassesses the situation and discovers an appreciation of—and even admiration of—“Mr. Yuck-Bug,” who the child thinks might be a beetle. Ruby discusses bioluminescent fish with the bug, draws pictures of him, and even feels contrite about yelling at him earlier. When night falls and the insect flies off, Ruby makes an exhilarating discovery about what’s lighting up the sky! This sweet story about changing one’s mind and seeing things from a new perspective will charm young readers, many of whom may be bug fans. Dark-haired, tan-skinned, gap-toothed Ruby, who narrates in chatty first person, is a realistic character who unabashedly owns up to a bug aversion and uses agency to overcome it. Mommy is light-skinned, while Daddy is brown-skinned. The energetic illustrations, created with a combination of mixed-media and digital techniques, are often set in panels and insets; some type is set in larger colored capitals for dramatic emphasis. (This book was reviewed digitally.)

What Are The Best Practices For Social Media Marketing?

by Colleen Hoover ‧ RELEASE DATE: Jan. 18, 2022 After being released from prison, a young woman...

How Are We Flaunting Our ‘Qualified Immunity’ Today?

Meta’s Updating the Terminology for Accounts Reached within Ad Campaigns