PECK FINCH AND THE HANGED MAN 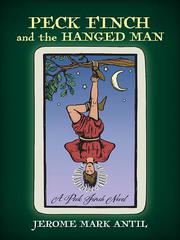 Boudreaux Clemont Finch—everyone calls him Peck— is a man of beguiling contradictions: Once “an illiterate Cajun French lawn-mowing hunk,” he is now in night school in Tulane, while he works at a law office run by his boss and sometime lover, Lily Cup. Despite his unprepossessing manner, he has a remarkably lively, observant mind. One night, he witnesses a young girl—he estimates she’s 13—abducted at gunpoint, pulled into a black Mercedes, and beaten. He suspects and later confirms with his own investigation that the girl has been forced into sex slavery. He learns her name—at least the one she is forced to adopt—is Tiffany. With the help of his friends, including Lily Cup, he decides to liberate Tiffany and “bust up” the trafficking ring, a terrifyingly dangerous mission. Meanwhile, Peck wrestles with his own traumatic childhood, one marked by unspeakable abuse at the hands of a man, Guillaume Devine, who raped his mother. Antil paints a sparkling tableau of life in New Orleans, one also sullied by a nefarious underbelly. He movingly creates a melancholic atmosphere where he can explore the “sadness in the world,” as Peck’s friend Gabe puts it. Better than most, Peck comprehends the way evil wreaks havoc in New Orleans, and he succinctly summarizes it to Lily Cup: “Bein’ rich ain’t a bad thing cher, but it’s the bad rich people looking for poor people that’s bad. It’s street-smart people looking for street stupid people.” The book unfortunately concludes on an incongruent note of false sentimentality—a neat denouement that “touched everyone’s heart.” However, this remains a thoughtful story and Peck a memorable protagonist.

How designers can help fix the U.S. government's customer service

Livvy Dunne shows gorgeous leotard for a moment of appreciation

An Introduction To ONPASSIVE Ecosystem

Are You Aware of What Happens When You Walk in the Room?” Asks The Wonderful Company’s CFO and EVP, Human Resources, Stephen Howe

George Santos Already Being Accused Of Sexual Harassment, If You Can Believe That