LOST IN THE MUSHROOM MAZE 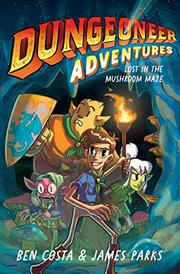 Switching to a hybrid format and aiming at younger readers, the creators of the Rickety Stitch and the Gelatinous Goo graphic novel series craft a ponderously didactic adventure in which new arrival Coop Cooperson demonstrates leadership qualities by mediating conflicts and keeping his nonhuman Dungeon Academy classmates together and on task in between brushes with toothy monsters and other narrow squeaks. The cast includes lots of monsters, not to mention a student body composed of imps, goblins, bugbears, and similar folk with silly names like Oggie Twinkelbark or Zeek Barfolamule Ghoulihan (the requisite bully). The tale takes a dismally familiar turn, however, when Coop, who reads as White, leads his team into an ambush by a reclusive tribe of small mushroom people who speak stilted English, at first threaten to cook and eat him, then end up kneeling before their savior after he slays a monstrous spider that was threatening them, a plot twist that unfortunately evokes racist tropes. (Rather than stay and be their god king, though, he nobly elects to return with his team to the academy and get a coveted Junior Dungeoneer badge.) The narrative passages, with layout designed to be accessible to new chapter book readers, are liberally strewn with grayscale cartoon scenes that offer frantic action and reaction shots as well as additional dialogue.

Supreme Court Still Being Really Dramatic About This Leaker Thing

Stock up on Audiobooks with Libro.fm’s Shop Small Sale

We are only at the very beginning of the wave of documentaries that will be released about...

The Bold and the Beautiful spoilers: Tridge wedding day

Interview with Joshua Scott Edwards, Author of An Ocean of Others