JFK & THE MUCKERS OF CHOATE 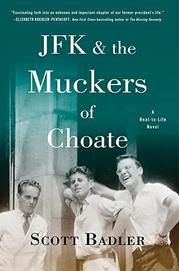 Journalist and nonfiction writer Badler states that this novel, focusing on John F. Kennedy’s time at the elite Choate School, is mostly based on actual history. Unfortunately, this first-person fictionalized portrait of a mutinous teenage underachiever fizzles. Episodes include gathering a group of fellow muckers to defiantly hold secret meetings before compulsory chapel and wear unsanctioned club pins, an explicit visit to a Harlem bordello, a closeted roommate’s offer of a hand job, and no less than four long dialogues with a Columbia psychologist. Interactions with the large Kennedy clan, particularly eldest brother and golden boy Joe Jr., play a large role. Both Lead Belly and Gertrude Stein parade past, the former having to pass his hat to get paid, the latter to make her famous comment about her hometown and encourage young Jack to write a book about brave politicians. In the end, the adolescent fuming and rebellion feel like a device for showing a future president developing leadership skills, exhibiting strength of character in dealing with his chronically poor health, and expressing strong feelings about the injustice of racial and religious prejudice. Readers can get the same from better conventional biographies without having to pick the invented bits out from the historical ones.

Donate to Classroom Libraries and Have Your Donation Matched!