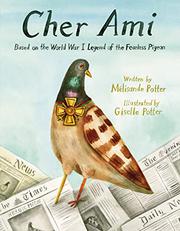 Admitting in an afterword that she’s invented details to fill out the “legend,” the author recounts in simple language how the eponymous homing pigeon was trained to carry messages from the front during the First World War and, despite enduring wounds, most famously delivered one that saved almost 200 U.S. doughboys from friendly fire. Her daughter Giselle invents details, too—starting with depicting the bird as much more brightly colored and patterned than she actually was (which does have the effect of making her stand out on the page and among other pigeons) and, in a bit of revisionist history, portraying American soldiers both on and behind the line of battle in racially integrated units. Though similar to Robert Burleigh’s Fly, Cher Ami, Fly (2008, illustrated by Robert Mackenzie) both in the factual embroidery and in the manufactured quality of some of the drama (“Each boom and bang was deafening. Cher Ami was not afraid.”), this does tell the tale in a more complete way by including the feathered messenger’s subsequent doctoring and artificial leg in the main narrative rather than relegating it to a small-type appendix. (This book was reviewed digitally.)

7 Anti-Skinny-Jeans Outfit Formulas to Try in 2023

Instagram Reveals How To See More Photos In Your Feed

A hiker girl, with a backpack and a self-portrait in stunning scenery at ukrainian rock … carpathiansgettyTwenty-seven-year-old...